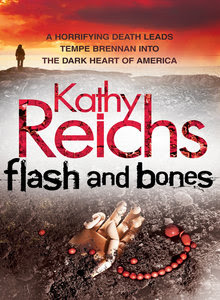 I feel I should explain how I managed to get my hands on an ARC of Kathy Reichs' new novel, Flash and Bones, as I'm a little surprised about this myself (though this seems to be the way I get ARCs now, by the sounds of it). I listened to the audiobook No Rest For The Dead, and commented on Twitter how the two chapters Kathy Reichs wrote were my favourites and reminded me why she's my fave crime writer. After that, I tweeted (half jokingly, not expecting a reply) something along the lines of "Would it be very cheeky of me to ask the publisher if I could have an Arc of Kathy's new novel?". Now, I expected nothing from this. I swear. But, within the hour, the UK publisher of the paperbacks (and sister to the publisher of the hardbacks) tweeted me back, saying "Sure! Give us your address and we'll send it to you." And they sent it to me. I did a happy dance in my kitchen when I received it.

So, what does Temperance Brennan investigate on this, her fourteen outing? Charlotte is getting ready for the biggest NASCAR week of the year. And it looks like Tempe isn't going to enjoy the hype or buzz as she is called to a landfill site near the speedway. A body has been discovered in a barrel of asphalt, a hand poking through the top…

With the country's media on Charlotte, Tempe has her work cut out to identify the body. Could it be the sister of a young man who went missing with her boyfriend ten years ago? As Tempe slowly begins to investigate, she slowly finds herself involved in the FBI and touching on one of America's largest fascist organisations. But before she can truly identify the body, the FBI confiscate the body and destroy it… By accident? Or are the FBI hiding something?

Now, I am sure that some of you lot who are Kathy Reichs readers are shouting at this blog, going "She's doing the same outline again! She gets a body, tries to identify it, the media goes into a frenzy, she tries to solve it and, when she does, her life is in danger". But, it works for Kathy and, if it aren't broke, don't fix it. And it was interesting to see how we got to the point where her life is in danger. And when you start a book which has the line "In the end, Summer saved my life", how could you not. It's almost like 206 Bones, where she awoke in a underground catacombs, and you have to read through the mystery to get to this point though you get some "flashforwards" of how Tempe got out of the catacombs, so you read two stories that, at the end, began one. 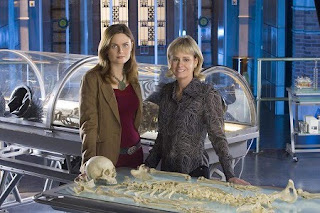 But this is very Kathy Reichs. She holds you with the mystery and then she gives you the science. I know that there are a few people who will say that all the science and NASCAR talk is a tad confusing and I suffered that a bit at the end but I was reading quite fast so it might have been me. But yes, I can understand that point.

I have also read one or two reviews, saying Kathy's later books don't have the same impact as her earlier novels. Now, seeing as it has been afew years since I read her debut novel and its sequel, Deja Dead and Death Du Jour, I can't possible say. But I am have got a copy of a 2-in-1 volume of Deadly Decisions and Fatale Voyage and I have been thinking of reading one of them in the future. Not sure when but seeing as this is fresh in my mind, I can compare and come back to you guys on that one.

But, Kathy is still my fave crime writer and she knows how to tell a good, twisty tale that holds my attention and kept me guessing, and I can only speak for myself. And, because of this, her YA novel, Virals (which I've had for quite a while but never seem to find the time to read) has gone up in my To Be Read pile and, seeing as I might read an early Tempe mystery, it looks like I might got on a reading binge in the near future…

PS - for those of you who are hoping that Tempe and Andrew Ryan to get their act together and get back together again, I think that ship has sailed. We don't see Ryan at all in this story! We hear him on the phone once or twice and have an email from him once or two…