GoodRead - The Girl Who Leapt Through Time 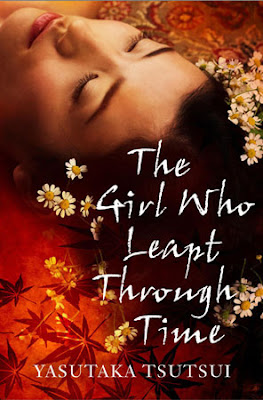 I'm not 100% sure how I became aware of this book. I'm not sure if I discovered it first on another blog - Portrait Of A Woman - when she was doing a joint "Japanese YA Novel Week" with another blog (called Death, Books and Tea) and then saw it on sale on Amazon's 12 Days of Kindle at the start of the year. Or, if it was the other way round: Amazon sale then saw it on Portrait of a Woman's blog.

Not sure but I bought it and, after reading the awesome Hollow Pike by James Dawson and not wanting to read another book I had high hopes on (Daylight Saving by Edward Hogan), I decided to read this as I wanted something fast, light and quite different from both Hollow Pike and Daylight Saving. Plus, if you read my New Year's Eve message, I said I wanted to be more brave and expand my reading so this seems perfect (I want to read more translations and I do have one or two in my pile so this was a nice starting point...)

But the two stories are quite different. The Girl Who Leapt Through Time is about Kazuko, who faints in her school science lab after smelling a lavender-like scent. When she wakes up, she feels different but thinks about it. Over the crash of three days, there is an earthquake, a fire at one of her friends' house and she and her friend get nearly run over. But at the exact moment of it happen, Kazuko time-leaps 24 hours in the past...

The other story, The Stuff That Nightmares Are Made Of is about Masako who has an irrational fear of Prajna masks and heights, and she decides to find out why she has these fears. At the same time, she helps her little brother, Yoshio, with his night terrors.

Now, these were fast. I started this late on Tuesday night and finished it on Thursday afternoon. And, sometimes, you want a fast read. And I liked the ideas that these two stories tackled - time travel and fear. But I felt that these issues weren't tackled property, or in a way which would have been interesting. Both these stories felt lacking as they could have been very interesting and very engaging novels in their own right. It felt like there could have been more...

Also, there were times I found the language used (either when characters spoke or prose) that I felt was quite tweed and, because of that, threw me out of the story and took a while to get back into it.

But the main problem I had with this was the lack of depth. It felt like you skimmed over the characters, their emotions and the events that could have been explored more. But, I have been told that a movie (trailer below with a fan video) tackled character developement, but with these two stories, they lacked depth and they lacked punch. Not my cup of tea, but glad I read them.