As you guys are probably aware if you have been following my blog for a while, I have a tiny crush on the lead in this series. But I'm not going to talk much about that - I shouldn't, really. Oh well... let's try without going all gushy over a possible fictional husband material.

Demon Eyes is the second book in the series, about a war on two witch families and Braden is caught in the middle of it. And while the war is on a tenderhook ceasefire, Braden is trying to get to grips over the events of the last book. Braden thought he destroyed a powerful demon. So why does Braden keep seeing him? Why does he keep seeing visions of him? Why is he hearing a cold winter voice inside his head? And when girls begin to disappear, Braden realise that the war between the two families is going to get suddenly worse, and only him and his powerful Witch Eyes can stop it from happening... but his Witch Eyes are dangerous. And he could be used as a weapon if he isn't careful...

Now, where to begin? I like this series. A lot. So my views on this is going to be a tad biased, but it is very much a continuation. You need to have read the first book, Witch Eyes, before you can read this as there's no real "This is what happened before". You have to no catch up. You're thrown into the story.

It's very magic driven. There was a lot of twist on magic, the feud and its history, and you have to be on the ball while reading this. It's going away from the normal world and the romantic element of the first story (which was fine with me as Trey, Braden's love interest, never gripped me and I got quite angry with him...), so if you were a fan of these sides of the story, you might feel a bit underwhelmed by it. But I like that it went away from it, though by the end, I was wondering if it was going too far away from it and was focusing solely on magic... 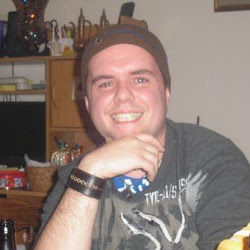 And character development with characters. That was good. Braden and Trey's character development was very good. We saw Braden go very dark and Trey no longer, to me, felt like a mindless robot-soldier. He asked questions and didn't always believe what his mother told him. This is a HUGE step as this was one of the flaws I had with Trey - he never questioned ANYTHING! And in Demon Eyes, he did! At last!

The plot - right, this is where I'm going to get a little unstuck. While the plot was good and we had magic and twists and moments where Scott Tracey pulled the rug from under you, there were times that I felt like this book was written to set up book 3, Phantom Eyes. Questions were asked, but answers... no where to be seen.

But saying that, I really enjoy this series and so, bring Phantom Eyes on! Only have to wait till next year. I can wait till then... though that ending... Not sure if I can get over that twist just yet. And I want answers! I need answers!