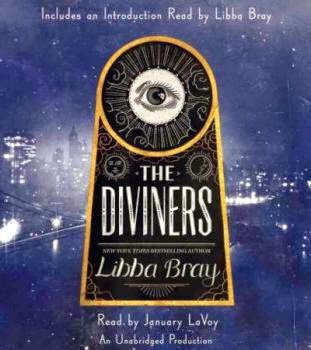 I am going to admit this here and now: I tried to read The Diviners once before. It was when the book was first released in hardback a few years back. Atom kindly sent me a copy and I started to read it. I got about 200 pages in and I just stopped. I couldn't bear the main character, the story was too slow for my tastes and I just couldn't face continuing onwards (which is rare for me but life, I have now decided, is too short to read crap books).

Fast forward two years and Midas PR, a company who is doing PR for Audible.co.uk, asked if I fancied doing a review of one of Audible's new releases. At the time, I picked James Patterson's Unlucky 13 (review here, by the way) and, on impulse, I asked if they had any details on The Diviners audiobook. And they kindly said that I could have a copy of this as well. So, THANK YOU MIDAS!

Evie O'Neil has been exiled to New York to lived to her uncle, and Evie is going to enjoy it. It's New York, it's 1926, perfect for a modern girl like her! Only snag is that her Uncle Will runs a museum of the occult and she has a secret gift that he must never find out about. But Will is asked by the Police is help them on a mysterious murder, Evie realises that her gift might be key to solving this murder. But with the body count slowly rising, Evie, her uncle Will and his assistant, Jericho, must work quickly.

But New York is one large city and there is always more than one story to tell. Evie's friend, Mabel, is sweet on Jericho (who barely knows she exists) and is sick of being in everyone's shadow. Jericho has a secret that no one must ever find out about. Pick pocket Sam Lloyd has his own secret and is looking for someone. Street runner Memphis is mourning not only is parents but his special gift. Theta smiles the brightest smile but is running scared. Henry, Theta's "brother" is hiding not only his gift but his sexuality as well.

And all the while, in the city that never sleeps, a terrible evil has risen. Be afraid, New York... Naughty John is on the prowl...

Ok, let's talk about the audiobook narrator, January LaVoy. I LOVED HER! She was a joy to listen to. I never felt rushed with her nor did I feel that January was just reading the book. It felt like she was living the book. This is a huge deal for me. So, for her, I can't fault her!

The story itself. Ok, I am going to split this into 2 parts. The first half and the second half. The first half was hardwork. It was just hardwork. This was that main reason I stopped reading the book. It was just HARD WORK. And it was VERY slow paced. We had the prologue - which I was hooked - and then getting to the story and start following Evie, and I begin to lose my interest.

I think the problem I have with part one is that Libba Bray is getting us use to the characters, their flaws and the world around them. Which is fine. This is the first book in a series. I get that. However, I wish the plot was a bit more pace-y within the first half of the book. Why couldn't we learn all this stuff but have the pace that this book kinda deserves? (When I was listening to the first half of the audiobook, I honestly thought there was paragraphs and chapters that could SO EASILY be removed). 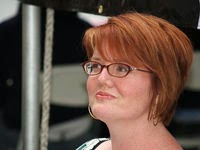 However, part two of the audiobook. Once we got to the chapter "The Hotsy-Totsy" (or was it the chapter prior, "The House On The Hill"?), things suddenly went up a gear and I sped through. The pacing was fast, things fell into place much quicker, characters met and my opinion on certain characters changed (mainly Evie - when we first meet her, she is spoilt, selfish and, at time, thinks of no one's feelings but her own. After "The Hotsy-Totsy", she begins to realises that her actions affect others [but this only happens when her best friend, Mabel, explodes at her in an argument]).

I much prefer the second half of the story rather than the first. It felt like it had become the story I wanted to read! IT CAME AT LAST!

So, you guys must go "Wait, so you hated part one but you liked part two. What does this mean about the sequel, Lair of Dreams? Will you read/audiobook that?". And I am very torn of this. On the one hand, I wanna keep going. I want to know where Libba is going to take the characters - that last half an hour very nicely set things up for book 2. However, I am very worried about the pacing. I can't go back to the pacing that the first half of The Diviners was.

I know I am very much in the minority when I say I didn't love the book (I like it, but I will never love it). But I won't refuse outright listening to the audiobook of Lair of Dreams if I was offered it. But only on one condition: if January LaVoy is the reader. If it's someone else, then nope. Not gonna happen.

But I think this book is a book that most people will love and enjoy if you invest time into it. I have and it's not exactly my cup of tea. But maybe the sequel will be...
Posted by Pewter Wolf at 07:00:00