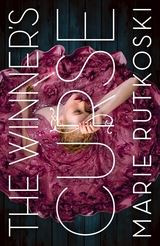 I'm not sure how I came across this. I think an author on Twitter that I follow mentioned it and, after a bit of snooping, I thought it sounded interesting. Not mind-blowing, but it had my interest. Then I saw it on NetGalley and requested it. I tried to read it, but something weird happened on it so I couldn't read it. Because of that, I requested a real physical copy. And because I'm an impatient person, when I saw this on Kindle for a super cheap price (It was less than £2!), I bought it and read it. And on the day I finished it, I received a physical copy.

Which is very pretty. So, if you are uncertain which version you want to buy (physical copy or ebook copy), go for the real copy. Your eyes may thank me later.

So, the story. As daughter of the empire's most powerful general, Kestrel's life has two outcomes: either join the military or get married. Great outcome for young women, huh?

The empire enslaves those who it conquer, so Kestrel sees Arin, a young slave for sale, she is startled. Startled by him and startled by herself for bidding for him. Bidding and winning. It's not long before Kestrel is trying to hide her growing feelings for him. But Arin is hiding terrible secrets, and before the book is through, Kestrel will realise that the price she paid was much higher than even she could have possibly have imagined...

Ok, let's talk about the cover before I go any further. When I first saw the cover, I liked it. It was very pretty. But my gut instinct was "It's going to be another Selection by Kiera Cass, isn't it?". If you have been a fan of my blog for a while, you know that I have read both The Selection and The Elite and, while they are fun summer reads, I have HUGE issues with them. So, of course, I went to this book fearing it.

And I was hugely surprised. It was nothing like The Selection (thank goodness!). It was highly enjoyable and highly addictive reading. I do have small problems, but I really enjoyed reading this book.

I think the reason for this was because it felt fresh and rich. Marie takes her time world building and adding layers towards it and the characters. Plus, she sets it in "high society" - something I haven't read before - so it was interesting to see Kestrel opening her eyes to the world around her. Then there is Kerstel and Arin themselves. Both characters were interesting to read. Neither felt dull and both grew and changed. Plus, the romance - it wasn't the driving force to the book - THANK GODNESS! Winner's Curse, to me, felt new and exciting and unpredictable at time. I thought something was going to happen or start to happen at the end of the book, but Marie throws it in the middle and I felt excited over that I didn't see this coming!

I did have problems with this book. The main was the amount of time Kerstel and Arin looked into each other's faces. By the end of the book, I get why these times were important, but at times, I was going "They had the same face as the last time you looked at them. Two eyes, a nose, a mouth, hair, etc!".

But I really enjoyed Winner's Curse, much to my surprise! Believe the pretty cover if you want to read a slow but well-written historical fantasy. Now, can I have the sequel now please?