Book Review - Inside The Magic 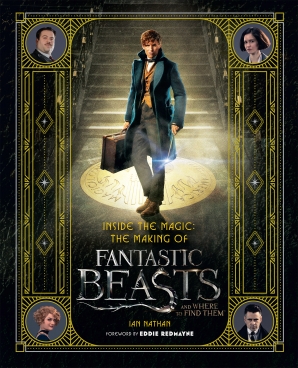 I don't think I make it a secret on this blog that I love Harry Potter. Nor do I hide the fact that I love reading making of movies/TV shows books (a few publishers know of my love and I thank them deeply for allowing me the pleasure of reading these delights. I have three awaiting my attention with one I have bought coming into my possession the next few days...)

So, when I saw this in my local Asda, I couldn't resist. I was curious over the new movie (I own the screenplay but not read it - I plan to read it after seeing the movie. Which, by now, I have seen but need time to process and I will talk about it once I have read the screenplay. I am doing the opposite of what I did with the Cursed Child so shhh...!) and I love behind the scenes information. And... I mean, POTTER!!!

This is a behind-the-scenes book revealing most (not all, but most) of the film-making of Fantastic Beasts, with character profiles (and small interviews with the actors), props and sets, information about New York, MACUSA and The Blind Pig, the characters within Newt's case and other titbits.

I am a little torn on this. Now, I love these types of books so, yes, this book can't go too much into depth because of spoilers. And, because this is an adult companion, it is more aimed for movie-goers and people who like this type of books (aka me). I loved the photos and the details. The amount of text is aimed more for an adult audience but I don't see why teens or children with a higher reading level can't read it.

However, there are problems. This isn't perfect. This does feel a bit like a whistle-stop tour of how the movie was made. Again, this is something I see in most "making of [insert film here]". Actually, compared to most of them, this has more information. So, for that, I will let slide, but it still felt like we were skimming...

But the main issue, the thing that tainted this book for me, was a small line. A sentence of 8 words. I know... I know... this is stupid to say, but I am going to state it. On one of the pages, linked to costume design, we have a small photograph of the actor Gemma Chan (you will know her from the Channel 4 show, Humans). She isn't an important character - her character has one sentence in the movie (and she is one of the few speaking characters in the movie who isn't white unless I am misremembered...), but we see her in character. The line that accompanies this photo is "Gemma Chan plays an exotic witch visiting MACUSA".

Why, OH WHY, is it that when a non-white character/actor (who isn't really important to the story) is in movie/TV show/radio/etc, they are described as "exotic"? It's a lazy writing, a throw-away remark which could and can be seen as a racist term. In this instant, the term devalues her character. She, to my knowledge, is a foreign representative visiting MACUSA to take part in a wizarding equivalent on United Nations. Her character even has a name - I checked! Madam Ya Zhou. So, why isn't her character name or the term "foreign representative" used? Why isn't it "Gemma Chan plays a foreign representative witch visiting MACUSA"? Or "Gemma Chan playing Madam Ya Zhou"? The term "exotic" should never have been used - it's cheap, lazy, sloppy writing.

So, book overall. While it's one of the better "making of [insert movie name here]" books, it does have some faults.
Posted by Pewter Wolf at 16:30:00

Email ThisBlogThis!Share to TwitterShare to FacebookShare to Pinterest
Labels: Books, Fantastic Beasts and Where To Find Them, GoodRead, Harper Collins, Ian Nathan, Inside The Magic, JK Rowling, reading, review