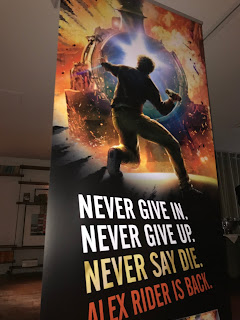 Let me tell you a story. Are we all sitting comfortable? I first discovered the Alex Rider series back when I was in college (in around 2003 - work the mental math of how old I am!). It was Eagle Strike, the fourth book in the series. I remember reading and enjoying it. So I backtracked to Stormbreaker then attack the books from there. I got to Ark Angel a few years later and went "He can't top this so am going to stop while ahead" (plus, I was going "Where the hell is Anthony going to take this now? WE WENT TO SPACE AND EVERYTHING!!! He's going to kill Alex and nope. NOPE! Or he's going to do a evil twist involving the ending of Point Blanc [FYI, which is my fave out of the series]").

But I liked this series and am very fond of them. So, when I got an out-of-the-blue email from Walker Books, asking if I wanted to come to the launch party of the latest Alex Rider book, I emailed "Yes!" almost as soon as I read it, then went "HANG ON! I thought Anthony had finished the Alex Rider series with Scorpia Rising... I know there's a prequel - Russian Roulette. Is this a prequel? Is Alex back in a new book? What is this?" And I decided to go into this as blind as I could. Little to no information WHATSOEVER (oh, that's a brave/stupid idea when you're going to an event where you think you might be meeting the author, dear readers...)

So, last Thursday, after a long day (up at 5am to do work from 6am till 2pm only to go to London and knew I was going to be up late due to train journey home), I rushed to London and made my way to the launch party (which was only a few minute walk from my train station - THIS NEVER HAPPENS!). And I almost didn't go in as the venue looked very swish (and I'm probably not cool enough to enter the building). But after going "I'm probably at the wrong place, what's the worse that could happen?" and discovering I was in the right place (by, I didn't realise till I got home, JR Moore who was doing an internship at Walker!), I slipped into the venue and did what all book bloggers do - I saw that there were people there and went "ARGH! PEOPLE!! FIND A DARK CORNER AND HIDE!!!"

This event was filled with people in connection with the book. Book publishers, TV peeps (well, ITV are in the early stages of turning Alex Rider into a "older family series" [PLEASE DON'T MESS THIS UP, ITV!]), friends, family, author... Oh yes, Anthony Horowitz was there. THE ANTHONY HOROWITZ!

You guys have rock stars, actors, musicians to get starstruck over. I go starstruck over authors. Plus, Anthony is a big author of my teens and early twenties so it's kinda a big deal, ok?

After a small speeches from Anthony's editor and Anthony himself, people got food, drink and got their copies of Never Say Die signed. I was too terrified to go over - do I need to remind you who he is [plus, I saw from a distant his sons - both very attractive and I didn't want to go "Whoa! Your sons are fit!" (I have the habit of putting my foot in it when I feel out of my element - as you are about to find out in the next paragraph or so!)

And then, out of nowhere, Jane from Federation of Children's Book Groups (who I met at the Noah Can't Even launch) appeared. We chatted and she asked if I had my copy of Never Say Die (which I bought that evening) signed. "No," I replied. "It's Anthony Horowitz. I can't go over there and ask. He -" I didn't get to finish that sentence. Jane and Rosi from Walker (who, also, just appeared - both are ninjas!) practically frog-marched me over to Anthony and went "This young man is a fan of yours! Sign his book as he's slightly imitated by your awesome!" [Ok, am para-phrasing, but you get the idea[. He signed my copy and we chatted - Rosi created a boomerang of us as Anthony wondered how you make a gif (if I can find it, will share in post!)


WE INTERRUPT THIS BLOGPOST TO BRING YOU A BOOMERANG!


Now we're back! Now, for the awkward "ahh..." moment. While chatting to Anthony (and with Rosi and Jane in earshot!), I mentioned how, earlier that day, I mentioned to my friends/other half (can't remember which) that was going to even and said "He writes the Alex Cross books". Anthony looked at me weirdly. "Apparently, in that moment, you are James Patterson in disguise" I now explained/backpedalled/blabbed. "We've never seen you in the same room together!" 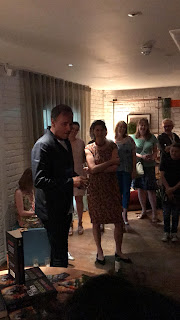 After that, Anthony had to go and chat to other people who came and I got chatting to Anthony's publicist/author pal, Justin Somper (via Jane. Thanks Jane!). He writes the Vampirates and Allies & Assassins series. It was really cool to chat to him about books, politics (is that a wise thing to chat about with a snap election in a few days time, one wonders?) and a few other things before it was time to go.

Before I wrap this up, I want to thank the people at Walker Books for inviting to this event. It was an honour and, once I found people to talk to (I need to be more outgoing to go to people I don't know and chat at these events), I have such fun. Thank you Anthony for signing that slightly hyper 30-something fan's book - and dealing with my tweets going "What the actually hell?!" and "I blame you for listening to Sheryl Crow's Tomorrow Never Dies" and now, am going to get that stuck in you head now!

ALEX RIDER IS BACK. Check out our animated #booktrailer for Never Say Die - out now in hardback and eBook #AlexRider @AnthonyHorowitz pic.twitter.com/UPEBtZ2v27
— Walker Books (@WalkerBooksUK) June 2, 2017