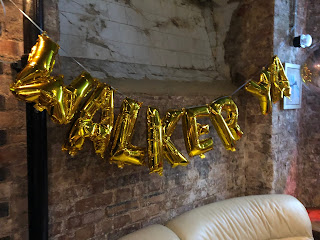 Or, as it's subtitle, Chicken Kiev or (my fave at the time of writing this) "WOLF!!!"

Tuesday night, I attended a blogger event for Walker Books and hear some upcoming YA titles that will be publish sometime this year. I wasn't 100% sure I could come to this due to my recent job change but I figured out very quickly that I could go so HOORAY!!!

Anyway, after getting to London a little earlier to snoop round Tottenham Court Road (mainly Foyles [I bought a book, EVEN THOUGH I AM ON A BOOK BUYING BAN! And for those of you wondering, Eragon by Christopher Paolini - not a grown-up fantasy that my recently book buying has taken me but I'll take it] and drool over some West End shows I would love to watch or rewatch - Harry Potter and the Cursed Child, Aladdin, The Mousetrap, Wicked - it's probably a good thing am going to see Hamilton in the coming few months), I made my way to a pub in near Farringdon for wine, books and a good ol' catch-up with bloggers and vloggers. I have been very out of the loop.

And my sense of direction kinda failed me a little. I got to Euston/King's Cross and thought "I'll walk there. It won't take that long..." OH, PAST ANDREW, YOU ARE STUPID. Walking and you are not friends...

Side-tracked, but once I got there (after getting a Pret Hot Chocolate), caught up with the lovely bloggers, vloggers and peeps at Walker (who are beyond wonderful. I love our little community and how positive and hopeful we try to be with this passion of ours) (plus, It's been a while since I've been to a last blogger event as Dani from Dani Reviews Things wondered when we met last. We think it was around 2 years ago [real life sucks at times] and met some new bloggers and vloggers (one came up to me - Amy from YA Under My Skin - and said "Due to you and my passion/hyperness with Laura and Michelle when we did a panel at YALC in 2015, I started my own blog" - which is a lovely but surreal. Plus, I discovered new bloggers that I've started following but didn't realise I was chatting to them till a few minutes into the conversation [Olivia from That Fiction Life is a good example. How did I didn't go "OH MY GOD, IT'S YOU!" to her face is anyone's guess!)

But you don't want me to talk about us book bloggers and vloggers chatting about books and the looks of shame I got when I said I STILL haven't read Patrick Ness's Chaos Walking trilogy or The Hate U Give (one of these I said to an EDITOR OF WALKER without realising it - but Chaos Walking has a huge following and am scared of reading it, only to not like it! I DON'T WANT TO BE THAT GUY!), you want to know the titles they mentioned. Well, I'm going to mention a few as these caught my attention and made me go "OOOH!"

The first title is How To Hang A Witch by Adriana Mathew. Ok, this doesn't grab me in the way I hoped, but I think you guys might like this. Having a feel of Lauren Kate's Fallen series (no idea why), this book follows Sam who moves from New York to Salem with her stepmother after her dad is hospitalised. But her homecoming is far from warm. Sam is related to Cotton Mather, one of the men responsible for the Salem Witch Hunts and some teens in her new school won't let her forget it. As their bullying tactics being to unnerve her and begin to parallel the witch hunts, Sam finds herself in a weird love triangle, between the boy next door and the angry ghost who haunts her bedroom. And now, with a centuries old curse now being rekindled, Sam find herself at its centre. History is going to repeat itself if she doesn't try and stop it...

Scythe by Neal Shusterman has been doing the rounds on US Booktube and, I don't know much about it, but I love the cover. So, when Walker announced that they going to publish the first book next month and the sequel in August, I was excited. Plus, the idea behind it is good. Dark, but good! Imagine a world where disease, crime, homelessness has been cured, the only way to die is to be "gleamed" (randomly killed) by a Scythe, a professional grim reaper if you will. Citra and Rowan don't want to be scythes - which makes them perfect to be apprentices and learn the fine art. But the Scythedom is corrupt and with only one of them going to become Scythe Apprentice, Citra and Rowan discover that whoever becomes the apprentice must gleam the runner up... 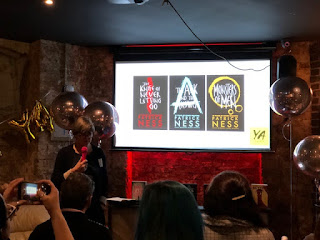 Earlier on, I admitted that I still haven't read Chaos Walking trilogy. Hopefully, this might changed as Walker is going to rejacket the series to co-inside with its ten year anniversary and the movie being filmed (starring Tom Holland and Dairy Ridley). We will have a black cover and sprayed edges. I hope that I will try and attempt to read this trilogy later this year/next year. I feel ready! Plus, with Release coming out in paperback this year and with his newest, And the Ocean Was Our Sky, rumoured to come out later this year, you are going to be busy if a Patrick Ness fan!

This is a little clean-teen for me but Flying Tips for Flightless Birds by Kelly McCaughrain does yummy and I will pop this on here and I sense I will need something light compared to my heavier reads. Debut set in Northern Ireland, we follow twins Finch and Birdy who are stars of the flying trapeze at their parents's circus. But when Birdy is hurt, Finch teams up with new kid, Hector Hazzard, to save he circus. But along the way, they have to high wire friendship, homophobic bullying at school, finding themselves and falling in love for the first time... all under the big top.

I still haven't read The Hate U Give by Angie Thomas. I'VE PYSHED MYSELF OUT OVER IT! I mean, I have been so excited for this book for so long but since I have the advance reader copy, I've been terrified to read it in case it doesn't live up to my unnaturally high expectation. But I know I will read it in the coming months as Angie's second novel, On the Come Up is coming out in June. Set in Garden Heights, we follow an aspiring teen rapper who goes viral online. Record labels want to sign her up, but people are also ready to abuse her success to get what their want. What happens when you get everything you thought you always wanted? 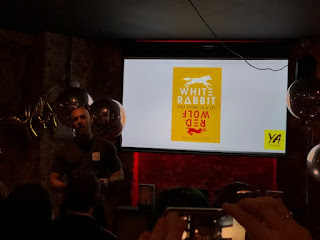 And now, the big mama! The reason for the blogger event - White Rabbit Red Wolf by Tom Pollock. Now, I was planning to go into this book knowing nothing, but a few elements of this story was revealed and I still want to read it. Maybe more. It's a thriller - with maths. STAY WITH ME HERE! Peter is a math prodigy and suffers from crippling panic attacks. But when his mother gets stabbed at an award ceremony and his sister disappears, Peter finds himself being dragged into the world of espionage where state and family secret emerge and blur...

And Tom Pollock was at the event. You might know him because of his Skyscaper Throne trilogy, but this is his first YA book. He chatted about what made him want to write this (the three stool legs for this book were "Spy novel inspired/fear/maths". He also read a tiny snippet from the start of White Rabbit Red Wolf (which was both funny, gripping and also a little heartbreaking). And some of us drooled over his arms (don't just us!). I mean, HAVE YOU SEEN THEM?!

Wholly gratuitous gun show because I have finished my book and I feel MIGHTY.
A post shared by Tom Pollock (@thjpollock) on Jan 15, 2018 at 11:14am PST

Am saying nothing. Also, it didn't help that while I was doing some tweeting, Tom was talking about mental health (he is an ambassador for TalkLife) and he yelled "WOLF!", making me jump out of skin, think there was a wolf in the bar and then wonder if this was a gay term I wasn't aware of (You have bear, otter, daddy, DILF... maybe wolf was a new one. Or what Tom was calling his arms. Ok, will stop that now...)

After all the book were talked about, there was more chatting, more wine and food. Which was good as book bloggers/vloggers are a hungry lot. And once all that was done. I had the joy of trying to get home before midnight...

Anyway, I did get home (only to have my cat be super hyper and find my foot was a great toy for his very sharp claws! Hence why I have plastics on my right foot) and I want to thank everyone who was at the event. It was a wonderfully fun evening and I can't wait to sink my teeth into these stories and to see you all soon!!!
Posted by Pewter Wolf at 07:30:00