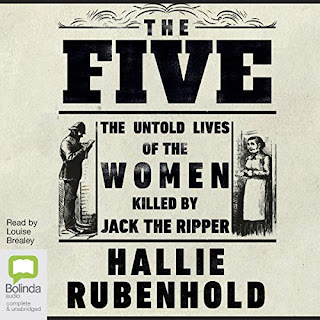 Since I first heard of this book earlier in the year, I wanted to read it. I am not a fan of True Crime and not really had much interest over Jack the Ripper (though I have said I would be curious to go on a Jack the Ripper Walk round East London), so the idea of me wanting to read this came very left field. I mean… why? Why would I want to read about Jack the Ripper and his murders?

But wanting to read this surprised me and when I decided to close my Audible subscription and use my local library and their audiobook app, I went to see this was on here. And it was, much to mu surprise, and I knew, without really thinking it through that I wanted this to be part of my Murder Month. No, not wanted. This HAD to be in my Murder Month.

The Five: The Untold Lives of the Women Killed by Jack the Ripper looks at the five women at the heart of this terror, and, with this, looks at the social pitfalls and peril of being a middle-class women (or just a women in general) in Victorian London.

I don’t want to go any further here as I want to go further a little later in this write-up.


I found this a fascinating, absorbing and real eye-opener of a book and I am now wondering if I should buy the physical copy.

Oh yes, it’s one of those books!

I must say before we go any further, this book doesn’t talk about Jack the Ripper. Hallie Rubenhold makes it clear from the get-go that her aim in writing this isn’t to figure out who Jack the Ripper is, but to talk about the lives of the five women and try and understand what let them to be in Whitechapel that awful autumn.

This book looks into these women’s lives and what each of them experienced - poverty, homelessness, alcoholism, motherhood, childbirth, sexuality, child-rearing, work, marriage, affairs and, in the case of two of the women, being prostitutes.

What was also fascinating to read is Victorian standards for women and how far we have come from them, yet how far we need to go for equality between the sexes. For example, a married man could have sex with another woman and could walk away from the affair without a blemish, yet the woman would have been called a “Fallen Woman”, and could lose everything. Another example is separation. If a man wanted a divorce due to his wife having an affair, he would only need one piece of evidence and the divorce would be granted. If a woman wanted a divorce due to her husband having an affair, who would have to find at leats two pieces of evidence before being taken serious.

What else was interesting was how the media wrote the stories up. We see a few times in the books that the author does throw shade of the media as they wanted to write something titillating to get readers but how some the articles were edited to heighten the tension (something I think we’ve all seen from all news outlets, regardless of media). Plus, the idea the author put forward that only one woman at the time of the killing was a prostitute and that they were all lying down when murdered adds an extra layer to the mystery surround their deaths.

I found this such an engrossing read and I highly recommend it to you true crime lovers out there!
Posted by Pewter Wolf at 08:00:00