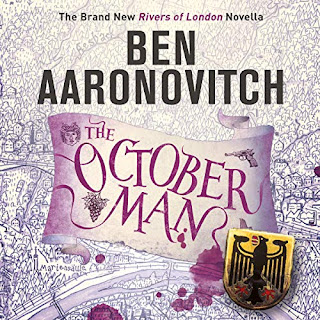 I am in two minds over whether or not to write this as part of my Murder Month. I decided, probably against my better judgement, that I will on the condition that I attempt to read the first book in the Rivers of London series this month as well (yes, I know, this is my first within this series and before you all have a go at me, when have I EVER read a book series in order? This is very on me brand).

The reason I bought this is because back in October last year, at the Orion Book Blogger Event, the sampler of this audiobook was played and I went “Ok, I need to read this!” so I preordered it a few weeks later and thought “I’ll have plenty of time to catch up”. Oh, foolish book blogger, do you know nothing about yourself? You’ve been doing this for how long and still, you don’t know yourself?

So, in this 7.5 novella of the Rivers of London series, we are no longer in London, but Germany. In Trier, to be exact. Famous for being Germany’s oldest city, its wine and now a dead body covered impossibly in fungal rot. Enter Tobias Winter, an investigator for the Abteilung KDA, the branch of the German Federal Criminal Police that handles magic and the supernatural. His aim is to get in, solve the case and get out, with little fuss, danger and, more importantly, paperwork.

Together with a frightening enthusiastic local cop, Vanessa Sommer, the two link the first victim to a group of ordinary men who create a wine club to handle their midlife crisis. But is it possible this club has reawaken a bloody conflict from the previous century? Looks like the duo will have the unearth the secret, magical history of Trier that goes back two thousand years. That is… is history doesn’t kill them first…

So, as you guys knows, this is my first Rivers of London adventure. So, my thoughts on this are… well…

Ok, it was good. But it wasn’t exactly great. It’s kinda the black sheep of the Rivers of London series.

I kinda agree with a mix of reviews I have read. The characters are a bit flat and bland at times, the pacing is odd in places, and the pricing for this novella is a tad much. It kinda needed to be fleshed out and be a tad longer. On the other hand, it was fun, fast read, and it’s always a positive (in my opinion) when an author tries to expand the world their series is set in. Plus, it was nice to enter this and not feel like I missed things because I jumped in quite late in the series.

But this is very much middle of the road for me. 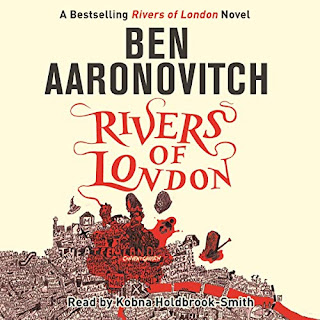 I think the problem I have with this novella is that this novella isn’t 100% certain what it wants to be. Is it part of the Rivers of London series with its hints towards Peter Grant, the Nightingale, and the magical politics in London and around the world (all reference but have no importance to The October Man’s plot)? Is it a new place for new readers to enter this world as enough was explain for new readers while giving loyal readers a nod and wink to the original series? Or is this a “backdoor pilot” for a new series (something we see quite often happen in US TV shows)? I can’t help feeling it’s the latter and, if that is the case, I can’t help feeling that some readers might be a tad annoyed and feeling a bit conned over it. Because, if this is a backdoor pilot to a new series, surely you could have made the leads from Rivers of London and October Man meet and possibly do a European case together then splitting off to do their own thing…

Like I said, this is my first time in this world and I do have the first Rivers of London novel on my kindle so, one day, I will read it. But October Man… it has its pros and cons for me.
Posted by Pewter Wolf at 08:00:00