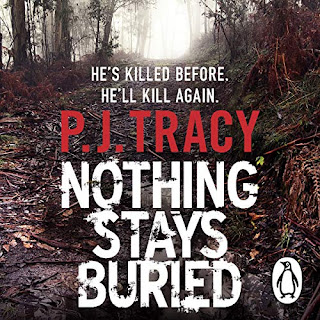 I wanted to include The Guilty Dead by P.J. Tracy in my Murder Month, but decided against it for reasons I explained back in July. But I had such a fun time audiobooking it, I decided I wanted another P.J. Tracy audiobook so when back in June/July (yes, I decided to prep for this month and get my stuff together and organise) via my local library audiobook app, I jumped at it. I do like a good audiobook and podcast, as you know!

This is the 8th book in the Monkeewrench or Twin Cities series (depending on which you prefer - plus, The Guilty Dead was the ninth so am backtracking) and it starts with a body of a woman beginning discovered in a dog park. When detectives Gino and Magozzi get to the scene, they soon realise that this is the work of a serial killer. And he’s stuck before as he left a playing card, like with his last victim over a year ago. Expect that card was the ace of spades and this victim’s card is the four of spades…

As Gino and Magozzi desperately try and stop the killer from completing the whole deck,  they cal on the computer skills of Grace MacBride and the Monkeewrench team for help. But they, too, are investigating a case: a disappearance of a young woman in farm country…

But are the two cases linked to each other?


Like with The Guilty Dead, I had a blast audiobooking this and going through the twist and turns at the cracking speed. I admit that I do like my crime/thriller stories to have a good pace and reason for me to keep coming back and go “one more chapter…”

Now, I have audiobook The Guilty Dead before I dived into Nothing Stays Buried and this is the eighth instalment in the series, and while there were throwaway lines and moments which refers to earlier cases, it didn’t spoil this instalment. This was a solid story that could be read/audiobook without reading the others.

I still have the same issue with the audiobook as I did with The Guilty Dead. The narrator needs to leave a beat or a small pause for when there is a scene change. They merge together and, if you are not with it, they will merge together into one long moment where you could go “Wait, what is Annie and Grace doing in this scene with Gino and Magozzi when she is several miles away?”. Because I have audiobook another instalment in the series, I was ready for this, but I do wish we have a moment to catch our breath and gather our bearings.

But I am really enjoying myself with this series. I have requested an eProof of the tenth instalment in the series, Ice Cold Heart (which is going to be interesting as I will be reading this, not audiobooking), and I do hope that, once I have read that, I might backtrack and start with the first or second book in the series, Want to Play? and Live Bait.
Posted by Pewter Wolf at 08:00:00