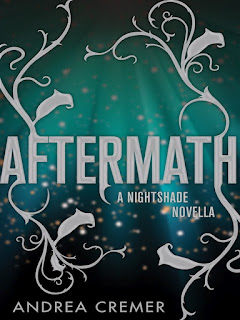 As you guys probably know if you've read this blog for a while, I love Andrea Cremer. I can't help it. Nightshade was the first real ARC I was given and it was a delicious read, as was Wolfsbane and Bloodrose. The first eNovella, Treachery, was ok, but I wanted more. So, when I discovered that Andrea had released another eNovella that set after Bloodrose, Aftermath, I knew I would have to read it. I didn't realise that it was released in the UK till a few weeks ago.

So, Aftermath. I don't want to say too much in case I spoil it, so if you haven't read Bloodrose, this has SPOILERS!!! But let me be a vague as I can. This does take place after the events of Bloodrose and looks at the aftermath and how it effects the characters who survived. Well, one character in particular...

Now, if you are like me and love Andrea's writing and want more, then you will read this. There's no two ways about it. But if you read the series and thought the series ended at the end of Bloodrose, then you might want to avoid this. I say this as there's a feeling to this that there's more behind this...

Now, the rest I say this is because of a line a character says that made me go "Oh, clever! Andrea is hinting towards her new prequel series..." but after chatting with Jeremy West (one of the cool peeps behind This Week In YA), made me go "Maybe I'm reading too much into it as my copy of Rift is staring angrily at me". Until Andrea tweeted me going "is hinting towards something new and secret", which, of course, got me excited.

Although, I have a tiny fear that Andrea Cremer is going down the "Cassandra Clare and James Patterson" route of sticking with a series and milking the cash cow dry. But I think Andrea is smarter than that as she doing different things to her fictional world (prequel set at the start of the war, then an adult erotica trilogy & this secret project) so I have faith that she will end the Nightshade world and write new things in the near future...

Of course, I loved the story. I wished it was longer or it was cheaper (it's £1.49) but if you're a fan of Andrea Cremer, this will tie you over till you get your hands of Rift (or till you can actually find time to read it, which is me at the moment of writing this post!)