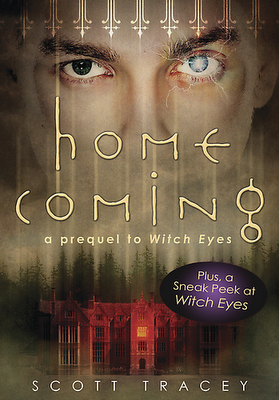 As you are probably aware, when I read Scott Tracey's debut novel, Witch Eyes, I kinda went gaga over the book. I LOVED IT! So, when I discovered that he wrote a prequel, Homecoming, I got excited, downloaded it on my kindle... and forgot to read it for several months.

So, what is Homecoming about? Set a year before the events of Witch Eyes, all Braden wants is to have a friend or two. But being a witch in training that has to be homeschooled... well... that makes having friends hard. So, what's the worse that could happen if Braden uses a small charisma spell?

Now, seeing as I got a bit of a crush on Braden, of course I'm going to love thiss short story. I loved how the voice was still the same and to see more of his interaction with his uncle as we only got a few chapters of Uncle John in Witch Eyes.

The story was a short, fun story to get to know Braden before you dived headfirst into the world of Witch Eyes (and there are the opening chapters in this - as it clearly states on the cover).

I suppose I better say the bad thing. Oh, I have a bad thing. This isn't the author's fault. I paid £1.33 for this story and I am a huge person, as you know, about getting what you paid for. I love this series so I am happy to pay this, but surely, it could have been a tad cheaper... just a wee bit cheaper.

But I like this book and it tires me over till Demon Eyes, the sequel of Witch Eyes, comes out (just seen it was out on the first of this month)... so, when I rear in gear and read it!
Posted by Pewter Wolf at 08:00:00