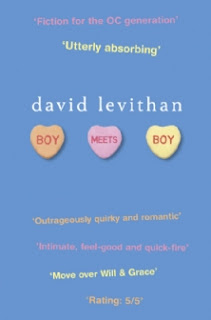 It's actually Jo from Once Upon A Bookcase who got me to read this book. She tweeted about it one day and I, who vaguely knew this title (but nothing else), tweeted back, asking questions. Within seconds, A TON of people tweeted me, saying that I had to read this book (I forgotten who must of you are. Sorry. But I'm pretty sure that @FitzChivalry_, @IanLamb1 & it was either @LizUK or @PortraitofWoman [or was it both of you?] all said "read this!"). When I found that there was no Kindle version, Jo kindly sent me her copy with a small letter that described this book as "sweet, beautiful story."

One of the main reasons why I love the UK YA book bloggers. Everyone is so nice! And happy!

Anyway, Boy Meets Boy. The story follows Paul, a young gay man who had to tackle the joys and pitfalls of high school in a town that really doesn't have a straight scene or gay scene as it got "mixed up a while back" (aka he lives in a town where there is no discrimination against a person sexual orientation). He has two best friends, Joni and Tony, and is close to Infinite Darlene (homecoming queen and star quarterback). He has an ex - Kyle - who refuses to talk to him. So when Paul meets Noah, a boy that makes his heart skip a beat, he knows he want to be with him. So when his life goes nuts (Joni starts dating a jerk, Tony [who lives in another town] having quite religious patents who think being gay is the work of the devil, Kyle suddenly starts talking to him and Paul makes a mistake that could ruin everything between him and Noah), Paul has to makes sure he gets his Happy Ever After...

Am going to try and keep this short: this is one of the best YA LGBTQ books I have read in a very long time! It's was refreshing and fun. It was like watching a chick-flick where you knew how the story was going to end and yet, you were hoping that it would end with a happily ever after!

I know I should talk about the book as a whole, but I wanted to write briefly about two characters: Tony and Infinite Darlene. Tony, to me, is one of the bravest characters in the whole story. I just wanted to take him out of the book and hug him. 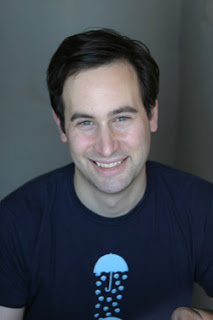 And as for Infinite Darlene. When I first met her (I'm making her sound real, aren't I?), I first thought "She's going to be a characterture, isn't she?" but within pages, I fell in love with her (as Jo will tell you from our tweets!). I kinda wanted to be her friend, yet not tell her any of my secrets. Not sure if I could trust her...

Yes, there are flaws. But I think the author did these to show the characters as people with flaws who make mistakes. The amount of time I mentally wanted to strangle Paul... But this is what made the relationship between him and Noah more real and endearing.

I really liked this book! And I do hope that if you can lay your hands on a copy, you treat yourself into this book's wonderful love story (because is first and foremost, a love story)! And now I can not wait to get my hands on another David Levithan novel...

(And again, thank you Jo for lending me your copy!)