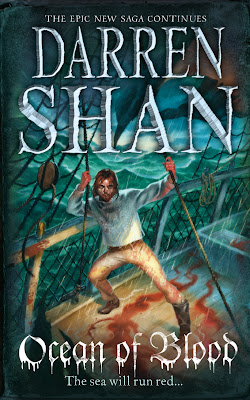 As you guys are probably aware, I have read a few Darren Shan novels in my past. I have read the first five books in his The Saga of Darren Shan (or Cirque Du Freak series if you prefer) and then, randomly, the eighth. I read the first five books in the Demonata series (my fave in this series is Lord Loss and Bec, though Demon Thief unnerved me the most!) and I read his short story for World Book Day 2006, Koyasan. I even reported one of his book signings last year (not read it? Here you go!)

At the event, I bought myself a copy of Ocean of Blood, the second book in The Saga of Larten Crepsley and now, over a year later, I actually decide to actually read it! (yes, I know I haven't read the first book in the saga and, technically, I should be reading his new series, Zom-B... Oh well... Read it now!)

In this, the second book about the past of Larten Crepsley, Larten is away from his master, Seba Nile, and is enjoying his freedom with the Cubs - wild young vampires with a taste for mindless fun, whether that be with gambling, women, or going to be the middle of battlefields in the middle of the night and enjoying the bloodbath. But fate has plans for Larten and continues to throw his life in a spin time and time again. But by the end of the book, what kind of vampire will he become? True to himself and his master... or lost forever in death and destruction...?

As I said earlier, I have read a few books in the Saga of Darren Shan, and there were times reading those books (mainly book four and five, Vampire Mountain and Trials of Death) where I felt that there was more the Crepsley than met the eye. So, to have this series and this book is awesome as it explains him better, whether you know of him via the Saga of Darren Shan series or you read The Saga of Larten Crepsley first. For me, it felt like going back and meeting an old friend. 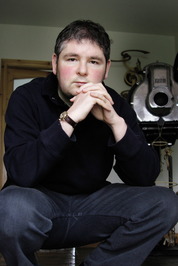 But, saying that, it did feel like I met an old friend and there was distance between us. The book almost felt clinical, and I think that this is because it was written in third person. I was never close to Larten Crepsley in the Saga of Darren Shan, but I thought this series would make me see what make the man tick. But I was kept at arm's length and that bothered. So was the time jumps. How many times did we jump several years forward? I know vampire age slowly so several years to us is nothing to them, but we did jump several times and that bother me.

And how long did it take for the Ocean to make an appearance?!

Now, what I'm going to say will probably get me attacked from all you true Darren Shan fans, but I didn't feel scared or creeped out by Ocean of Blood. In all his previous books, I can remember scenes that creeped me out or, in one case, had me exclaim "Oh God!" on a bus (Demon Thief, in case you're wondering). But this didn't scare me. Maybe I'm too old for the scares of Darren Shan (good grief, I hope not!)

While I do want to know what happens in the third book in the saga, The Palace of the Damned (which I don't own), and the finale, Brothers to the Death (which I do own), I'm not going to be in any hurry to return to them. I want to keep my return to them like meeting an old friend. But I do hope that, when I do, they scare me just a wee bit...
Posted by Pewter Wolf at 20:15:00