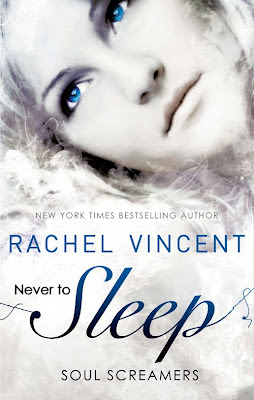 I'm not a Soul Screamers fan. I know that sounds odd, seeing as in the past, I have read the two previous eNovellas that Rachel Vincent has written, My Soul To Lose and Reaper. So, of course, when she and Mira Ink released this, Never To Sleep, I was in two minds before I bought it. I do enjoy reading her eNovellas but for some reason, I don't get on with the series. Every time I try to start My Soul to Take, I seem to lose interest very quickly. But I have heard that the series goes up a gear from book three onwards and I would quite like to, one day, read one of them.

So, for you fans out there, Never to Sleep takes place at the same time as the fifth in the series, If I Die. This eNovella does have a spoiler about If I Die, so my advice is read this AFTER If I Die but BEFORE Before I Wake.

This eNovella follows Kaylee's cousin, Sophie, who won't let her cousin's weirdness get in her way. Not after all the work she has done to get the right look, the right friends, the right life. But when she bumps into a new transfer student, Luc, and they both see something so horrible that Sophie scream and, somehow, both of them are transferred into a parallel world. With no way to get back, Sophie begins to panics... is this real? Or does insanity run in the family?

I liked this. A lot. I always enjoy reading Rachel's eNovella but I enjoyed reading about this spoilt, self-centred character who, when faced with something impossible, somehow manages to keep her head and fight back. Sophie is a funny character and there's a lot of inside jokes that am such fans of the Soul Screamers series. One of which is when Sophie thinks that her "insane" cousin, Kaylee couldn't handle the Netherworld. I snorted at that line.

Luc is an interesting character. This is very much his introduction as, from the other reviews I have read, he's playing a major role in Before I Wake, so I might have to treat myself to that to find out happens.

This is very much a story for the fans so if you're a fan, enjoy. If not but you're curious, go back to the first book, My Soul to Take or the eNovella prequel, My Soul to Lose, and work your way forward...
Posted by Pewter Wolf at 08:00:00