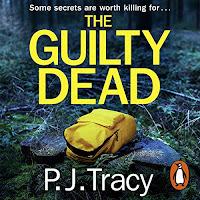 Before I go any further, I want to say that I was going to pop this into a themed-month I am thinking of doing this coming September. I was thinking of doing a crime/thriller month - basically, reading books where people die in them. But, as I was writing this, I changed my mind and decided to pop it up now, but am going to read/review another book by this author for that month if I decide to go ahead with it.

Ok, backstory time. I have read P.J. Tracy once before, MANY MANY years ago when Want to Play? (the author’s debut) first came out. This was around the time I was beginning to get into the crime genre and didn’t know anything I can’t remember if I liked it or not (I think I did), but I do remember that I wanted to check out the other books in the series. Expect I didn’t. And now, years later, I requested this and a few other titles by the author via NetGalley (eProofs) and am now, FINALLY, making some headway with them.

And the reason I went for this one is because I started getting audiobooks from my library (via BorrowBox app) and this title was available first (am on hold for Nothing Stays Buried, as well as other titles from other authors, all within the genre of crime or true crime…)

In this, the ninth instalment of the Twin Cities or Monkeewrench series, Gregory Norwood is a wealthy businessman and close friend of the lead candidate for Minnesota’s Governor, is found dead on the first anniversary of his son’s drug overdose. It seems obvious that grief drove him to commit suicide.

Expect why would a left-handed man use his right hand to pull the trigger? And why is there blood and hair of a photo-journalist at the house - when his body is discovered in park mere hours later?

What should be an open and shut case turns into a murder enquiry and with this, it raises the question: is there something dark hiding in city’s most powerful family’s closet? And with Monkeewrench’s beta-test of a computer programme discover a possible terror attack might be happening soon, everyone has to work fast…


I had a blast with this. I whizzed through the audiobook and not once felt that the plot was slow or dull.

This, in a weird way, reminded me of James Patterson when his stories get it right. The chapters were short and punchy, the plot was fast (I think this novel takes place over 24-28 hour period), you never got bored as it’s quite addictive. But, unlike James Patterson, this didn’t feel like a cookie-cutter plot. There was a bit of meat to its bones and story and characters felt a tad more complex.

And from other people’s reviews, if you are a long time fan of the series, the character development is slow and hugely rewarding. While, if you are a new reader to the series, you never feel like you’re missing out or you entered the series at the wrong place. The Guilty Dead felt both like a standalone and yet a good instalment to a long running series.

I do have to admit that I did audiobook most of this and, at times, I got a little frustrated with the narrator as some voices sounded very similar. The same goes with scene changes. Now, in the past, when I have listened to audiobooks, if there is a scene change or we change to a different character’s point of view/situation, there has been a gap of a few seconds so listeners know the scene is changing. Not in this audiobook. The narrator just powered on, leaving no breather for listeners to go “Oh, we’re changing times/locations/characters/etc”. By the end, I got use to this but at the start, it was incredible jarring.

But saying that, I did hugely enjoy myself. Like I said earlier, I do have one or two other P.J. Tracy novels to read/audiobook and I will try and get to them as soon as I can.
Posted by Pewter Wolf at 08:00:00