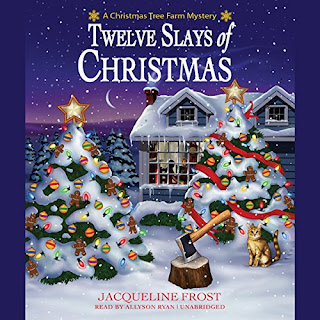 These are the last two audiobooks I blitz before the end of 2020 (yes, we're now getting towards the end of 2021 reading/audiobooking. And you can blame me discovering a bunch of audiobooks on Audible's Plus Catalogue [am doing a trial with Audible again. I don't know why but yeah, here we are. Again).
And the last two are cosy murder mysteries in the same series. Hence why I'm only doing one post as they were ok. They were fun, but nothing really to write home about.
Ok, let me do a quick summary of both titles.
In the first, Twelve Slays of Christmas, Holly White has returned to her home town of Mistletoe, Maine after her Christmas Eve wedding was cancelled, nursing a broken heart. But her time back to help her parents's Christmas Tree Farm and their annual Reindeer Games doesn't get off to the festival start she hoped when Holly discovers the President of the town's Historical Society is bludgeoned to death on the edge of the family. And with the town's new sheriff discover that her father and the farm's reindeer keeper both argued with the grouchy President moments before her death, Holly is determined to find the killer. Though the killer is watching Holly...
And in its sequel, Twas the Knife Before Christmas, a year has passed from the previous year's events and Holly is hoping for a quieter Christmas. Shame that's not gonna happen as the body is discovered in the town's centre - and all the evidence is pointing to Holly's friend, Caroline. A video of her arguing with the deceased is circling, his car is behind her house and the murder weapon is a customed marble knife. But Caroline can't have done it - and Holly is determined to prove it. But when Christmas just ten days away, her family Christmas tree family having renovations on its kitchen and buying a new inn, Holly's jewellery business taking off and her relationship with the town sheriff becoming suddenly strained, can Holly really prove Caroline's innocence and bring the killer to justice?
Read more »
Posted by Pewter Wolf at 07:30:00 No comments: 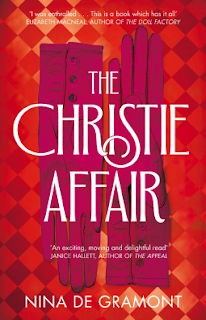 We all know Agatha Christie. She's the Queen of Crime. We all know or are aware of at least one of her creations and one of her mysteries. And we all know that, in 1926, the author vanished for 11 days and no one knows the truth about what happened to her as she never spoke of it. Even in her autobiography, Agatha Christie: An Autobiography, she brushes those days and never speaks of it. The only thing she says about that time is the two books she wrote around that time - The Big Four & The Mystery of the Blue Train - are the two stories she had difficulty writing and most disliked.

And main people are curious over those missing days as, before she vanished, her husband told her he was leaving her for his mistress - Nancy Neele - and her beloved mother died months earlier. And the fact that Agatha never spoke about it has us still puzzled to this day. Did she have a nervous breakdown? Did she vanish to spite her husband, hoping he will leave his mistress and return to her? Did she vanish to frame him of her murder and start a new life?

And many authors/films/TV shows have tried to guess. We have Andrew Wilson's A Talent for Murder, suggesting Agatha was being blackmailed to commit murder. We have the movie, Agatha (starring Dustin Hoffman and Vanessa Redgrave), that suggests that Agatha was planning to kill herself and frame her husband's mistress. We have TV movie, Agatha And The Truth of Murder, an alternative history, that suggests that she was solving the real life murder of Florence Nightingale's goddaughter, Florence Nightingale Shore. Hell, we even had a Doctor Who, episode - The Unicorn and the Wasp - that suggested aliens were involved in her disappearance (it's a delightful episode, FYI). And, more recently, The Mystery of Mrs. Christie by Marie Benedict and now The Christie Affair.

Told from the point of view of Archie Christie's fictional mistress, Nan O'Dea (not Nancy Neele), we see what happened and we look into Nan's past and wonder...
Read more »
Posted by Pewter Wolf at 07:30:00 No comments:

Christmas 2021 Audiobook - She Who Became The Sun

I finished this a few days before Christmas (hence why I classed this as a Christmas review). I wanted to get a few titles (two or three) read before Christmas and New Year's Eve that I have promised publishers I would do. As you all know, if you follow me on my socials (mainly Goodreads and Twitter), I am useless at requesting a story in any form and then making a prompt review. They are always late, but I hoped that, over the Christmas period, I could at least attempt to have a few titles - bought, borrowed or requested - ready for 2022, hence why I decided to have a slightly longer blog break over the Christmas period.
And so, here we are.

Title And Author: She Who Became The Sun by Shelley Parker-Chan

Bought, Borrowed or Gifted: eProof gifted by UK publisher via NetGalley in exchange for honest review/reaction while Audiobook’s borrowed from local library via BorrowBox app. 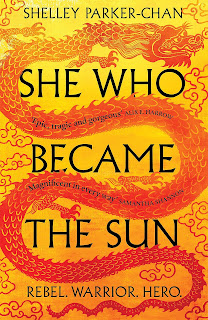 I'm not sure how to write a blurb for this title so, bear with me. Set in 14th century China, two children's futures have been revealed. The boy is promised greatness, the girl nothing. But when the boy dies, the girl makes a snap decision to survive: she takes her brother's identity and joins a monastery as a young male novice. Her need to survive burns deep within her and she is willing to do anything to keep herself hidden and to live.
But when the monastery is destroyed, she makes another decision. She decides to not only claim her dead brother's identity but his abandoned, foretold greatness as well.
Read more »
Posted by Pewter Wolf at 07:30:00 No comments: 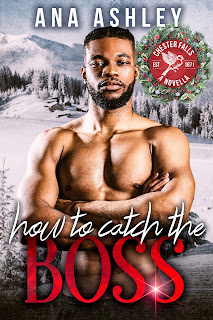 I'M BACK! After a nice long break (yes, this Christmas blog holiday was longer than normal, but I'm quite happy with this decision as, sometimes, we need a long break to find ourselves and make plans...). Anyway, for the next few weeks, you will be reading write-ups of books/audiobooks that I have read/listen to over the Christmas break. Normal(ish) schedule will resume in the next few weeks. So, once we get into (let's say...) February, you will see my 2022 reading! So, brace yourselves!
Anyway, I was hoping to get this up last year, but one of the MM romance novellas I was reading took a little longer than I was expecting so decided to push this MM romance heavy post back to 2022.
Now, originally, the initial plan was I going to do individual reviews on some Christmasy titles that I read or try to read before I go on my Christmas blog break, but as I was writing to write a short review for eNovella, How To Catch The Boss by Ana Ashley (4.5 in the Chester Falls series, in case you are curious), I decided that I might push a few titles together and show you guys that I have gone against my typical "I need to play catch up on my reading/review (which yes, I am!) and read something Xmas!" And so, here are a few titles.
Read more »
Posted by Pewter Wolf at 07:30:00 No comments: