I am THRILLED that I'm taking part in the Tinder blog tour . And I am thrilled that Sally Gardner, author of Tinder, has taken time out to write this blog post, explaining how the Thirty Year War inspired Tinder. So, without any further delay, let me hand you over to Sally:

I have always been interested in the bits of history that tend to be overlooked. My research has shown me that nothing happens in isolation.  Learning historical dates in class is meaningless unless you understand the significance of them, you need to have something to hang them on.

When I was at school it never occurred to me that the reason for the first and second world wars could lie way back, buried in the folds of history.In fact, I think there is a good argument to say that the wars have been mis-numbered and the First European War actually took place in 1618 and went by the name of the Thirty Year War. It was without doubt one of the bloodiest and the cruelest wars that had ever been fought in the Holy Roman Empire and it took place in the many feudal states that made up Germany at the time. Every country in Europe at one stage or other took part in this war including Scotland.  It was the first time that thousand strong armies were employed in battle.   It left marauding soldiers who became mercenaries and were prepared to fight for any army who would pay them. The war was ignited over religion - the Protestants versus the Roman Catholics and ended up, as nearly all wars do, being about land.

Whole swathes of Germany were left abandoned, farms destroyed and crops ruined. Whole villages and communities were wiped out. The combined effect of the plague and the war left an estimated 3 million dead. The cruelty that was unleashed then is hard to take in and once such cruelties had been unleashed it was impossible to put back in Pandora’s Box. 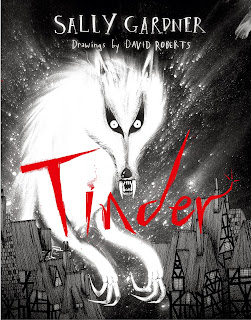 I was very fortunate to meet with extraordinary historian, Peter H Wilson, whose book The Thirty Years War: Europe’s Tragedy is a very enlightening read.  Unlike him I am not a historian - my approach to history is to try and make the past come alive so that it can become relevant to the readers of today. I've done a lot of research into modern war and have been fortunate enough to meet serving officers who had returned from Afghanistan and Iraq. All those I talk to said they had been altered by the experience and found civilian street life hard to adjust to.  One said “you only know you’re alive when you are dancing on the edge”.

I wanted to Tinder to tell a story that is true to all wars.  It matters little if you are fighting with machetes, knives, muskets, gunpowder, swords or chemical weapons. The effect is just the same.
Posted by Pewter Wolf at 08:00:00