Audiobook Review - The Gentleman's Guide to Vice and Virtue 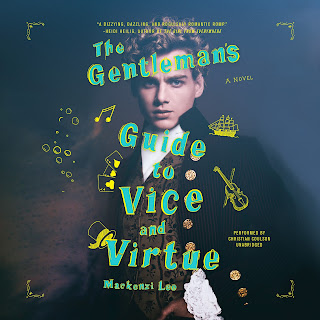 You guys on the Internet do love this book. It's getting a lot of love from other book bloggers, vloggers and Instagram. So the fact it's taken me till now to listen to the story is a bit of a surprise. I mean, this has elements that would make me spend a lot of money to buy - huge amount of diversity, adventure, fun.

Anyway, how did I get this audiobook? Well, one day, I was randomly listening to latest episodes of podcasts I loved listening to years ago and fell out of favour with them for one reason or another. One of them was Answer Me This and they announced that they were doing a thing with Audible where if you do a free trial via their website (answermethispodcast.com/audible), you can get two audiobooks for free. And I love free things so off I went and I got this and Deborah Harkness's Book of Life (review for that is here). So, thanks Answer Me This.

Anyway, Gentleman's Guide (I'm not going to state the whole title through this blog post) follows Henry "Monty" Montague has been born and bred to be an English gentleman. But he doesn't act like an eighteenth century gentleman should. He drinks, gambles, sleeps around, makes reckless decisions and, somehow, is allowed a tour round Europe for one year. After that, he has to grow up and run his father's estate, something Monty is horrid over (for reasons that are explain through the course of the book). But this year away is going to be great, he knows it. He's going with his best friend, Percy, they are going to have fun and hopeful, this will be the year Monty can tell Percy about his all-consuming crush for him...

But that's not going to happen. His little sister, Felicity, is joining them so she can join finishing school (something she is loathing, though she's been demanding an education for years) and when Monty makes a reckless (and somewhat stupid) decision, their trip turns into a manhunt with the three being chased over Europe, things might not go as Monty hope. Or will it...?

I am HUGELY TORN over this. On the one hand, I completely get why you all love this so much. The diversity with LGBT+ characters, black characters, characters with medical conditions, characters with backstory (one main character's backstory - Monty's - is a bit of a trigger-warning, so be on your guard with that), how this book tackled racism, homophobia and the slave trade in this historical settings, gender equality. This book tackled a lot of issues and yet, was still fun.

Which makes this next paragraph a bit hard to write. While this was fun in the last half-ish of the story, the first half was a struggle. Not because the story didn't really kick off for a while (it kicks off, really, after the characters leave Paris), but because of Monty. Now, I get now that Monty goes through a huge character development and the Monty at the end of the book is the Monty I liked and enjoyed reading about. But the Monty for the first half or three quarters of the book is a problem for me. He was arrogant, self-involved, completely thoughtless and reckless that I found him quite hard to like. So much so that whenever I had a moment to listen to this, I would always find an excuse not to. I would have to push myself to listen and push through because once things got into gear storewide and with Monty's and Percy's relationship, I was there. But the first half of the book, for me, was hard. And there were times in the second half of the book that when Monty made stupid mistakes or rash decisions, I did want to shake him and go "You're having such wonderful character development! Don't go backwards on that!" 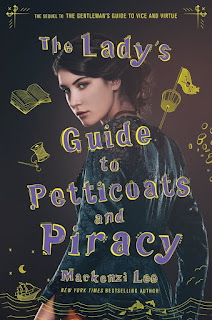 So... yeah... I am not in love with this compared to most of my book blogger and vlogger pals. But, I hear you ask, will be you reading/listening to the sequel/companion novel, The Lady's Guide to Petticoats and Piracy, that follows Felicity? ... maybe. I mean, I like Felicity and her no-nonsense, badass-ness so I would be intrigued to see what Mackenzi Lee does, but I won't be rushing out to buy it.

However, if Mackenzi Lee fancies writing something linked to Skippy-o (no idea if that's correct spelling or not. AUDIOBOOK!), the pirate captain who we met 3/4 of the way through the story, then I would be on board for that. There was something about his character I really connected with...
Posted by Pewter Wolf at 07:30:00