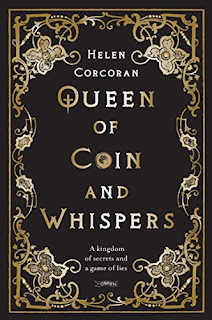 I HAVE AN EXTRACT FOR YOU GUYS!!!

Queen of Coin and Whispers is a debut from Helen Corcoran and I'm very excited to share this extract from you as this book screams everything that I want to read this year. It's fantasy and queer and it sounds perfect!

When idealistic Lia inherits her corrupt uncle's throne and his bankrupt kingdom, she brings in a new spymaster, Xania, who only took the job to avenge her father's murder. But as the two spend more time together, the more they fall for each other, which could ruin everything for both of them.

Am keeping this quite vague as I want you to read the extract!

So, before I hand you over to the extract, I just want to say thanks to Triona at O'Brien Press for asking if I wanted to be involved in this tour!

Now, if you want to say hi to Helen, pop over to her website at helencorcoran.com or go to Twitter and say hi to her at @hcor. And, after reading the extract below you crave more info, you can go to either obrien.ie!

Now, ONTO THE EXTRACT!

The Queen’s private study was smaller than the public one, yet the turquoise walls and golden wood made it more inviting. It suited her, but right now she didn’t suit it. She was sickly pale, with dark circles under her eyes: understandable, considering she’d recently entombed her uncle. I thought she’d reschedule our meeting, but Lord Martain had said, ‘She doesn’t have time. Monarchs never have enough time.’

She was too pale for her mourning purple. The colour was royal, a symbol of their authority and old divine power. A period of royal mourning was the only time the rest of us could wear it.

The monarchy edged theirs in black, adding another layer to their grief.

‘Some rules,’ she said. ‘Those who work with me don’t show fear. Even if you’re terrified, learn to hide it or we’ll accomplish nothing.’

Tired or not, she fitted into rooms with gilded wallpaper and heavy curtains spilling to the ﬂoor. The small crystal chandelier over our heads was cut in an older style, but worth more than my parents could ever have aﬀorded.

‘If I make an incorrect statement or assessment,’ she continued, ‘you’re expected to speak up. Coin argues with me when he feels it necessary. Matthias tries to see how quickly he can prick my temper, but don’t follow his example. Public protocol is diﬀerent, but I don’t have time for elaborate ceremony in private. Understood?’

‘Yes, Your Majesty.’ There was no point in admitting I didn’t know how to navigate a less royal protocol.

‘Good.’ She pushed her papers aside. ‘Coin said he prepared with you?’

I’d spent time with Coin every evening since our first meeting, drilled until my head hurt and his nerves frayed. Nothing had been said about Brenna’s visit.

The Queen rose. ‘Follow me. Don’t bring your papers.’

We went through a side door, then two empty rooms, until she stopped before a double door and grasped the handles.

She glanced at me. ‘You wanted to prove yourself, yes?’

I nodded, though it was less want and more had no choice in the matter.

‘I don’t like surprises.’ Her smile held little warmth. ‘But I like surprising others.’ She ﬂung open the doors and stepped into the room.

A wall of noise hit me: laughter and chatter, brittle-bright, a packed room of nobles on display. Vivid satins and silks with intricate embroidery, smooth velvets, jewels ﬂashing in the candlelight.

As I followed the Queen, a crystalline moment of silence spread. A servant should have announced her first, giving them all precious seconds to prepare.

They curtseyed and bowed in unison, chorusing, ‘Your Majesty!’ They surged apart, creating space for her to glide towards an elevated chair – the only seat in the room. She sat. Another pause, like a bated breath. Unsure what else to do, I stood beside her. Voices suddenly broke the silence, crashing against each other.

Despite their surprise, I was the unsettled one. I was the one who didn’t belong.

The room was large for entertaining, dark blue with dove-grey wood and silver accents. It felt cold. Servants held trays of glasses and small, delicate foods. Now facing the crowd, I recognised them as Sixth and Seventh Step, all Opposition politicians. The Queen had arranged a gathering to win their support.

The Opposition was a balance to the Government, usually with diﬀering opinions on legislation. Collectively, Parliament was supposed to keep the monarch in check. The current Opposition had united around their mutual loathing of Vigrante, but was hindered by Alexandris’s weak leadership. The Queen would need their support when Vigrante and his Government inevitably opposed her reforms.

‘Your Majesty.’ An elderly gentleman approached and swept an efficient bow.
Lord Ealkenor, my memory informed me. Low Seventh Step, astute businessman, frugal to the point of miserly. Papa had admired his business sense, and despised everything else about him. Lord Ealkenor’s family had put him in charge of their financial interests, though they, too, despised everything else about him.

The Queen held out her hand out for him to kiss. ‘Lord Ealkenor. We’re so pleased you accepted our invitation.’

He brushed his lips over her knuckles. His eyes ﬂickered towards me. My shoulders tightened.

She gestured to me. ‘This is Miss Xania Bayonn, daughter of Lady Harynne and the late Baron Bayonn: the newest of my ladies.’

He raised his eyebrows. My pronounced lack of title and Papa’s lowly one hung between us. Theoretically, a Queen chose whoever she wanted to join her ladies. Realistically, they were from Sixth and Seventh Step families who’d always supported the Crown.
A baron’s daughter did not make a royal lady.

He bowed. ‘Isn’t it a royal lady’s duty to mingle?’

It sadly wasn’t her duty to commit violence on the Queen’s behalf.

The Queen’s smile turned wintry. She pressed her fingers against my sleeve in a silent command.

‘Ask Lord Ealkenor what the Pastry Master thinks of him,’ I whispered. Lord Ealkenor was notorious for entertaining with thin fillings and sparse batches to make his money stretch.

No one enjoyed his gatherings.

Only the barest quirk of her mouth betrayed her. I curtseyed and stepped oﬀ the dais, aware of the eyes upon me. I didn’t know where to go. I only knew these people as glimpses in the halls, names in whispered gossip. Our families were not friends. Being announced as one of the Queen’s ladies didn’t give me the right to simply join their conversation –

Well. Actually, it did. Being one of the Queen’s ladies surpassed my rank.

‘I’ll handle that,’ the Queen had said, at my concerns about my lack of social mobility.

I had to prove how I responded to unfamiliar situations.

‘Miss Bayonn!’ A woman, two years older than me with pale skin and ash-blonde hair, stopped before me.

I smiled. ‘Lady Terize.’ We worked together in the Treasury.

She was lower Sixth Step, but lacked airs and was generally pleasant to be around. But her lack of self-confidence led to mistakes, so we often fixed her work together before it reached Coin.

She clasped my hands. ‘It’s a relief to see a familiar face!’ She was too polite to say I shouldn’t have been here at all. ‘Is your family here?’

I shook my head.

I might have been Third Step-born, but Mama had taught me etiquette as thoroughly as any Sixth or Seventh Step child. I could make small talk in my sleep. When they asked how I’d joined the Queen’s ladies, I said, ‘I made her laugh.’ It didn’t satisfy them.

I followed Terize, smiling, laughing, complimenting people, and silently tallying the prominent politicians. Terize’s mother, Lady Patrinne, was deep in conversation at the opposite side of the room.

Terize avoided her. Everyone knew Lady Patrinne’s hand lay heavy over Terize’s self-doubt, and she publicly criticised her after too much wine. Someone so indiscreet about family couldn’t be trusted, but she could still be useful.

When Lady Patrinne had tried to get one of her elder daughters accepted into the Dowager Queen’s ladies, she’d been politely, pointedly rebuked. But the new Queen was a fresh start. If I ‘inﬂuenced’ her into accepting Terize, who was kind when her mother wasn’t pulling her strings, it was a step towards gaining a Parliamentary informant.

A smattering of whispers tugged me out of my thoughts. A gentleman approached the dais with a full glass in one hand and a wine bottle in the other. The whispers died into silence.

He held the glass towards her. ‘I propose a toast, Your Majesty, to stronger ties between the monarchy and Opposition.’ He bowed, as much as the glass and bottle would allow. ‘With my compliments.’

The Queen didn’t reply, her gaze fixed on the glass.

The unspoken rule in Court, for all, was: don’t drink from a glass that didn’t come from a servant or wasn’t poured by the host. It didn’t prevent all poisoning attempts, but it was a signal of trust. A monarch’s every drink and meal had to pass a poison-taster.

The Queen couldn’t drink it, of course. But she risked oﬀence if she refused, which Lord Naruum was surely trying to provoke.

Why else would he oﬀer her untested wine in a room full of politicians?

No one moved, poised for whichever ill-fated decision the Queen would make. They were all wealthy, most from old bloodlines, and all bound by tightly knotted webs of etiquette and manners. They wouldn’t come to the Queen’s rescue. Though it would privately come with great favour, it would also involve public embarrassment.

Logic implied Naruum’s wine wasn’t poisoned, but what if logic was wrong?

If I became the Queen’s Whispers, my greatest responsibility was to keep her alive.