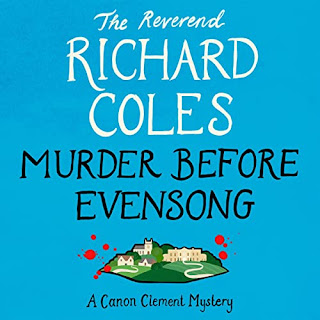 Not sure how to write this one as still in slump with blogging/reading (oh, the joy of anxiety-include reading slumps), but I preordered this and decided to give it a listen as I thought this, as a cosy murder mystery, might ease me back into reading/audiobooking on a more, regular bases.
Well, that was the plan. It took a good few weeks for me to complete it. And I would make myself listen to this either on the way to or from work. Most days, I did both to help men unwind from work, but I would try and do at least 20 minutes a day.
So, where the heck do I start here?
Title and Author: Murder Before Evensong by Reverend Richard Coles
Publisher: Orion/W&N
Bought, Borrowed or Gifted: eProof gifted by UK publisher via NetGalley in exchange for an honest review/reaction, though I bought and listened to audiobook.
Canon Daniel Clement is the Rector of Champton for the past eight years. He lives with his eldery spitfire of a mother, Audrey, and his two dachshunds, Cosmo and Hilda, and he had his brother, Hugo, popping in and out of his life.
Life in Champton is a typical, country village in the mid-1980s. But when Daniel suggests installing a lavatory in the church, the parish is unexpected divided. Then things take a turn when the Anthony Bowness – cousin of Bernard de Floures, patron of Champton – is found dead in the church, stabbed in the neck by a pair of secateurs, the village is close to fracturing. As the Police begin to investigate, Daniel must try to keep his community together and try and figure out who the killer is for who knows how many more will die before the truth comes out…
Am going to be complete honest, I was kinda expecting more from this.
I’m not saying that this is bad – it wasn’t – but there are too many niggles here for me to enjoy this.
Pacing is one issue that I’m only thinking of now as I’m trying. It took its leisurely time. I get why – it’s trying to be The Thursday Murder Club, The No. 1 Ladies Detective Agency or Murder at the Vicarage. An almost gentle, cosy murder mystery. But the pace is quite slow, and this feels more like a diary of a country parish rather than a murder mystery.
Another issues is characters. So many characters are thrown at the reader that I completely lost track of who’s who and, when the bodies did begin to pile up, I didn’t care on who died because I didn’t know who’s who and they’re connection to each other.
I listened to this via audiobook (read by the author, Richard Coles) and, while I liked his gentle and slightly soothing tones, the author didn’t really do much on making characters voices different. They all sounded the same to me, and I don’t think that helped my previous point.
I do want to say that I was listening to while in the depth of a reading slump, so I might be a bit more harsh/unkind to it because it feels like most books/audiobooks I’ve listened for the past month or so has taken a lot of effect. But I must have liked it enough through all my nitpicking as I finished and went “ok, that wasn’t so bad. There’s potential, but it’s just wasn’t my cup of tea.”
And I think that’s the thing here. I think this series has potential, but things got in its way. If I decide to continue with the series (I’m not sure I will. Will have to see what book 2 is about and have a think about it), the pacing needs to be tighten and maybe less characters should be thrown at the reader, as I want to try and attempt to figure out who the killer is…
Posted by Pewter Wolf at 08:00:00