Another Code: The Book? 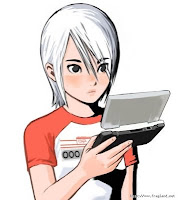 Okay, this is random, but over the past few days, I have been play a game on my Wii (Nintendo all the way, baby!) called "Another Code R: A Jounrey into Lost Memories". This game is a sequel of a game on the DS (DS Lite or DSi or whatever breed of Nintendo Dual Screen it is now).

But that's beside the point, on the front cover of the Wii game, it claims the following: "READ AND SOLVE LIKE A MYSTERY NOVEL". And, well, I began to wonder...

Why haven't Nintendo and CING (the developers of both games) released these games in book form?

I mean, not all book readers play game consoles and not all game-players read books. And as Nintendo are saying that they want to reach everyone, isn't this a good way to do it?

Sure, there will have to be some things taken out and some things put in, but I would love to read Ashley's advertures on Blood Edward Island and at Lake Juliet. It would be a hell of a lot easier taking a book to work than my Wii console (and with my DS - i love it far too much to take it to work. I would break it, knowing my luck.)