For some people, this is what you've been waiting for. For others... well, don't read this, nor go into a book shop. Or the book section of your local supermarket. Or online.

Yes, that's right, Dan Brown's new novel - sequel to "Angels and Demons" & the even-so-popular "Da Vinci Code" - "The Lost Symbol" has been released and, already, reviews of it have been released, stating that Dan Brown has outdone himself.

So... six years after the "Da Vinci Code" was released, is the wait what we're looking for, or is it going over old ground due to the old saying "If it any broke, don't fix it"?

When you guys have read it, let me know. If you're not, then tell me what you think of the hype. Am very curious. (I did buy myself a bopy and, if I ever find the time to read it after TRUE BLOOD, CATCHING FIRE and goodness know what else, will let you know...)

Oh, small thing I read and laughed at (minor spoiler? Well, two lines from the book so STOP READING NOW IF YOU DON'T WANT TO BE SPOILED!!!") 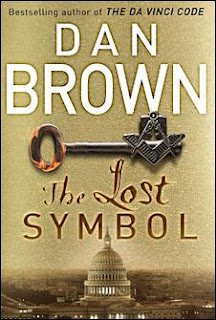 Right, have you stopped? Are you sure? Last chance...

Well, here's what I found! And am sure Mr. Brown himself was speaking, not Mr Robert Langdon.

Within the first few pages of chapter one, a woman rushes over to our hero and says, after explaining that her book group read his novel on the Sacred Feminine and the Church, "...What a delicious scandal that one caused! You do enjoy putting the fox in the henhouse!"

Quote taken from "The Lost Symbol" by Dan Brown, page 8, published in the UK by BANTAM PRESS. Copyright of quote belongs to author, Dan Brown.
Posted by Pewter Wolf at 20:16:00