Imagine you’re at your best friend’s funeral, but they’re going to bury an empty coffin. 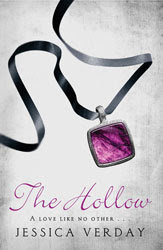 That’s what happens to Abbey at the start of “The Hollow” by Jessica Verday. Abbey is at the funeral home for the town of Sleep Hollow (yes, THAT Sleepy Hollow), trying to understand why her best friend, Kristen, would suddenly disappear. It’s at Kristen wake that she meets the mysterious (and, of course, drop-dead gorgeous) Caspian.

I quite like this book. Not only do I like the fact that every chapter starts with a short quote from the original “Sleepy Hollow” story, but it stands up by itself, not really needing the Sleepy Hollow legend to survive (though it does reference the story in several places…). As for the love story element in it, I feel that most readers of the Twilight Saga will like this book.

(But saying that though, the last few books I have read recently [that I have and haven’t reviewed] I think most Twilight fans would like…)

There’s, also, a slight edge of “Things are not what they seems” with this book and with one or two of the characters (won’t spoil it by saying who!) and that gives the book a mysterious edge.

Now, there is something I need to say that might put people off so am stating it now: this is the first book in a Trilogy and, for some people; the ending might be seen as a very “open” ending. There is a sense of closure, but some people (myself included) could easily see that it’s open and I know some people might find that irritating.

I will be reading the next book in the trilogy (rumours are flying that the next book is going to be called “The Haunting”…) and I hope that there will be some answers (as the author promises us. She said that book 1 is about questions, book 2 is about answers and book 3 is about choices… remember that, folks…). And I hope she writes more of Ben! Please, Jessica, more Ben!

(Couldn’t find a place for this in review but, because there’s something about the book that lingers in the mind [very much like Shiver and other books of late]. So much so that I kept finding songs on my iPod that I found relatable to “The Hollow” [that is very surprising!] The first song that I thought of [and the only song I can remember off the top of my head at the moment] is “Flightless Bird, American Mouth” by Iron & Wine - and here's the link for you all to investigate. http://www.youtube.com/watch?v=d1BgYTZ4Mxc)
Posted by Pewter Wolf at 20:18:00