What would happen if a vampire marked you and you had one of two choices: either go to a school of vampires and accept the Change or let your body reject the Change and die? Which would you choose? 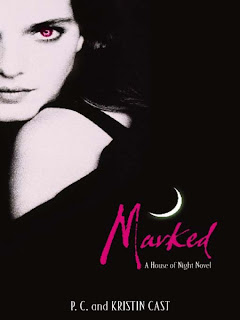 This is what happened to Zoey in the first book of the popular House of Night series, “Marked”, written by mother daughter team, PC & Kristen Cast. She gets marked by a vampyre and faces this choice. But once she’s made her choice, life becomes more complicated as she starts to attend the House of Night, a boarding school for fledging vampyres. She has to make new friends, start new lessons (no Maths or Geography lessons here), try not to get on people’s bad sides, try to fit in and try to control her bloodlust (something that she shouldn’t be experiencing for another few years).

Imagine basically your teenage years at school but add fangs.

I, surprisingly, really liked this. I speed-read this within a week and enjoyed the whole different spin on vampire – sorry, vampyre – that the House of Night series added. There was no signs of fangs and there is almost a Celtic/Pagan feel to how they worship the Vampyre Goddess, Nyx (and there’s something you didn’t expect to read, I bet!).

But, if you guys are expecting a story which is tied up neatly within the covers of the book, you might not want to read this. This book basically lays down the groundwork for the future books within the series, leaving one or two loose ends dangling to be tied up in the next book or soon after that…

There is, also, the small fact of some bookshops put stickers on this book (well, the whole series, actually) saying “This Book Is Unsuitable for Younger Readers”. Now, usually, I am against this idea – a good book is a good book, no matter what age you are and what age group the book is targeting, right? – but this book does use language and there are some very sexual scenes that are unsuitable for younger readers.

But, I do like “Marked” and, when I have more time (and my “To Be Read” pile is much smaller [this pile does include some Sookie Stockhouse books I impulsive I bought. I only read the first book so far – must review that for you guys! But so many vampire-based books... hence why I surprised that I really like "Marked"]), then I will try and get my hands on the second book in the series, “Betrayed” (No idea why, but I sense that a betrayal will happen in that book…)
Posted by Pewter Wolf at 20:59:00