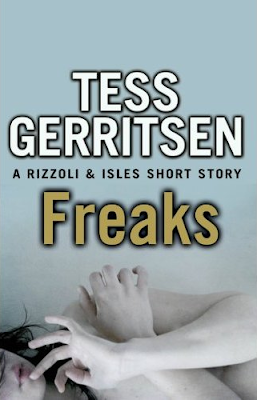 As some of you guys know, I quite like Tess Gerritsen and am quite excited about the TV show inspired by the characters, Rizzoli And Isles (which will be shown in the UK on Alibi tonight!). The show is huge on its US channel, TNT, that a third season has been commissioned. And so, when Tess's US publisher wondered if she would write an short story on the TV show's US website, as an experiment. A way, really, to introduce the fans of the TV show to Tess's books and, in America, to give some extra titbits.

In the UK, you just the story, some information about the book series and a small advert for the TV series on Alibi (expect they got the date wrong. It's Tuesday 13th September, not Wednesday 13th September). And it's a FREE short story!

In Freaks, Boston homicide cop Jane Rizzoli and medical examiner Maura Isles investigate the death of Kimberly Rayner. Her body was discovered in an abandon church, next to a open coffin. She looks like she's been strangled, but what's weird is that the young man who ran away from the scene says that he and Kimberly were vampires. But did this guy kill Kimberly? And what about Kimberly's father who suddenly burst onto the scene...?

Now, I must stress something. This is a FREE SHORT STORY! I feel I have to stress this as Tess has written a blog about the reactions to this (here it is) and some of them were quite negative.

But I like it. It was fast and somehow mixed both the books with the TV show (for those wondering, this story takes place between The Killing Place [aka Ice Cold in the USA] and The Silent Girl), but this is a fast read. It would have fitted perfectly into the Quick Reads range, as I read this very quickly - less than half an hour. And the flow of the writing kept you reading.

I know Tess said she won't write another short story, but if she did, I would be very pleased!