I am very lucky and honored to welcome Lydia Syson to the blog. Some of you guys will know Lydia as the author of A World Between Us, That Burning Summer and her latest, Liberty's Fire. And because of this, Lydia is going to try and answer one of the several hundred questions I threw at her- How did you decide what facts to put into the story and what fact did you discover that you couldn't write into the story?.

Thank you Lydia for taking time out to write this post. And, also, to anyone in the Bethnal Green area, Lydia will be doing a free drama workshop on That Burning Summer at Rich Mix, with the drama group, A Spaniel In The Works. If you want to know more, go to http://www.richmix.org.uk/whats-on/event/day-of-hope-1945-2015-1939-45-those-burning-summers-with-award-winning-childrens-author-lydia-syson/ and check it out! 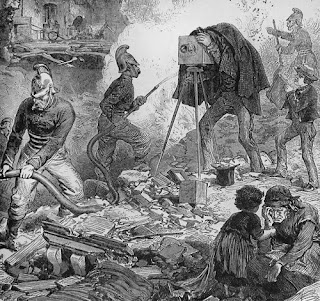 I wish I could pretend I have cunning plans and secret systems for this.  But in the end deciding what to put in and what to leave out usually seems to come down to instinct, at least to begin with. A few startling ideas and images grabbed me at the outset for this book – for example, the image of black and burning sheet of paper flying through the air, a photographer setting up his hooded camera amid smoking ruins, corpses lined up in coffins, National Guardsmen in uniform posing proudly by a barricade – and stayed with me to the bitter end.

I work with a real historical chronology, and getting that sorted out in my head (and on my computer) is the first step. Then I can build the action around the peaks and troughs of what actually happened, so the characters reflect events.  I don’t like the kind of historical novels where really famous real people constantly pop up or the characters are miraculously right there just as something significant is decided.  I knew my characters wouldn’t have been at the Commune committee meetings for example, eavesdropping on the drafting of new laws. But they could come together for big scenes like the proclamation of the Commune at the Hôtel de Ville, the concert at the Tuileries Palace or the destruction of the Vendôme column.  Almost right to the end the book opened with the moment which historians usually begin their accounts of the Paris Commune: when the women of Montmartre defend their canon from the Government troops who are trying to take them away after the Siege of Paris has ended. I tried it on family and friends and my lovely editor, obsessed with the idea that was the beginning of the story.  It just wasn’t working though, however I rewrote it. I kept the facts in, but fed them in later, at one remove. There’s a lot of dripfeeding of information involved in historical fiction. 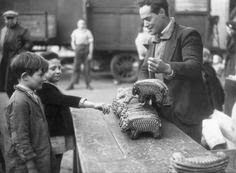 Of course there are facts and ‘facts’. I knew there had been a Gingerbread Fair during the Commune because I found a couple of references to it.  I always make old-fashioned gingerbread and ice it myself at Christmas, including a gingerbread house, so as soon as I read that I could smell the spices in the air, and imagine the snap of biscuit.  I found photographs from the 1930s of the gingerbread pigs for which this fair was famous.  But I had to guess what the other sideshows were, putting it together from memory – there’s an old-fashioned fairground at the Black Country Living Museum for example – and imagination.  I’d loved a scene with a bear in book I’d read set in early twentieth-century Russia, and I think I discovered that there’d been a boxing bear in California during the Gold Rush. I don’t think it matters if there wasn’t actually a bear or a wheel of fortune on that particular day in that particular square in Paris. How different characters in a novel react to a scene like that can tell you so much about them.

My writing can be rather like my desk – organised chaos! – and I don’t know what I’d do without a programme I use called Scrivener.  I won’t bore you with the details, but (once you’ve got the hang of it) it makes it very easy to manage both the research and first draft, with multiple windows and documents you can flick back and forth, and all sorts of things like that, keep track of bibliographies and things to do lists and images and websites. I come across something I know I’ll need for a certain chapter, I can plonk it roughly in the right place, and find it again easily. It’s hard to believe now that the notes for the first long piece of writing I ever did – my PhD – were written entirely by hand in A4 notebooks, and I didn’t even have a laptop. Not least because I can barely read my own handwriting now!
Posted by Pewter Wolf at 09:00:00