Katharine McGee Talks the Dazzling Heights of the Thousandth Floor 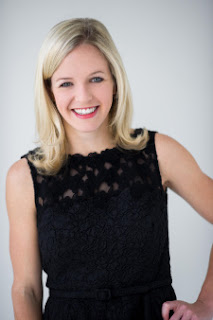 I am excited to welcome Katharine McGee onto the Pewter Wolf! Katharine is the author of The Thousandth Floor and its sequel, The Dazzling Heights, which was published last month.

Now, the best way to describe this series (as both books are still on my To Be Read shelves - yes, I am THAT SLOW a reader! Don't let the blog & the blog break fool you, dear reader!) is Pretty Little Liars meets Gossip Girl but set in the future. (I know, it sounds like the perfect soapy show for ITV2 and the CW, doesn't it?)

Now, before I hand it over to Katharine, I want to thank her for writing this guest post. I know she is currently writing/editing the third and final book in the trilogy, The Towering Sky (correct me if the title is wrong), but I was thrilled that you could find time to write this. I devoured this as soon as I could (was on holiday so had to wait till I got home) and it makes me want to discover a working Time Turner so can read this! I, also, want to thank Jessica at HarperCollins, who was super helpful when my unannounced email enquiry popped into her Inbox and she acted as Katharine and my in-between! You rock!

Ok, with that out of the way, over to you, Katharine!

I always thought my first book would be a fantasy novel.

As a child, I read everything I could get my hands on, from high fantasy to historical fiction to mysteries. The more pages, the better, and the more books in the series, the better still! Some of my favorites were Philip Pullman’s His Dark Materials trilogy, the Redwall series, and everything by Madeline L’Engle. Even now I seek out sprawling, epic stories set in intricate worlds. I’m one of those people who loves front matter: family trees, casts of characters, and especially maps! These are signals that the world I’m about to encounter is one worth exploring—that if I keep my eyes open and pay attention, I’ll encounter something truly wonderful.

Like many readers uncertain of what to do in the real world, I majored in English, and was lucky enough to get a job in publishing after graduation. I worked for four years in New York as an editor of young adult novels. This was in 2013, at the height of the dystopian era, when we were all reading The Hunger Games and Divergent. I couldn’t help being concerned about our fascination with those titles. Why was our society so fixated on these bleak, dark visions of the future? Why hadn’t anyone envisioned a more realistic future? I wondered what the world might look like in a hundred years if, instead of destroying things, we got it right—if each generation actually left the world better than they found it.

All of these thoughts were brewing in my mind when I read an article about “vertical urbanization”: the idea that cities in the future will grow increasingly tall, rather than “sprawling” the way they do now into spread-out suburbs. There are multiple arguments in favor of skyscraper cities: they are vastly more energy efficient, not to mention better for the environment. Some buildings in Asia such as the Shanghai Tower are already miniature vertical cities, with retail, apartments, and office space all combined in the same building. There are even interior gardens, and helipads! My imagination was caught, and I knew this would be the perfect setting for my non-dystopian future novel.

I may not have written a fantasy, yet there are still fantastic elements within The Thousandth Floor. The technology isn’t oppressive or frightening, as in some science fiction; instead it is aspirational, and tantalizing, and sometimes even whimsical. My characters send each other instant messages through computerized contact lenses. They get fibrojet tattoos that move and shift colors (how badass is a tattoo that changes shapes?) They take antigravity yoga classes, and ride a high-speed maglev train from New York to Paris just for dinner, because it’s only two hours away and why not? Whenever I could, I based the technology in the novel on current research and innovation. But there are times when the technology I’ve created feels more like magic than it does like tech—such as when the characters drink alcohol from floating bubbles, or send paper planes zooming around the hallways of the school on tiny micro-lifts. These are details that feel more like Harry Potter than they do Star Wars.

So if it isn’t fantasy, then what is The Thousandth Floor? Its themes are contemporary in feel—dealing with relationships, and families, and the pain and confusion of growing up. It has high-stakes technology and forbidden romance, trust built and then broken, secrets revealed. It has an overarching mystery hook that won’t resolve itself until the very end. It’s a mishmash of a lot of things, but I guess most books are, because how else would new writers get ideas unless from the books they’ve already read? If nothing else, I hope The Thousandth Floor keeps young people reading—and if it inspires anyone to invent a hoverboard or instant-hairstyler, you won’t see me complaining.
Posted by Pewter Wolf at 07:30:00