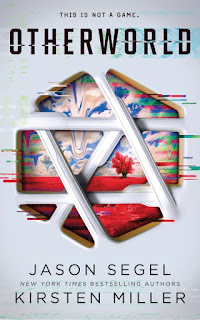 I am thrilled to be part of the #VisitOtherworld blog tour to celebrate the release of Otherworld, written by Jason Segel and Kirsten Miller.

Welcome to life 2.0. There is no screen or controls. You not only see and hear this world - you can touch, taste, smell... In this new reality, there are no rules to follow, no laws to break, where you can indulge in every one of your desires... so, why would you ever leave...?

To celebrate this book, I am allowed to share an extract for you. And if this wets your appetite, I am hosting a tiny contest to win a copy! All the details of the contest will be on the Google Form so check them before you enter.

Now, with that out of the way, ONTO THE EXTRACT AND THE CONTEST!


Three dogs emerged from the brush. They seemed enormous to me at the time, but they couldn’t have been much bigger than your average border collie, and all three of them were clearly starving. Their gray-and-golden coats were mottled and their skin clung to their ribs. The trio slinked toward me, yellow fangs bared. They’d been stalking me for a while, and they were ready to make their move. I was a plump little veal calf lost in the woods. I’m sure I looked absolutely delicious.

I grabbed a stick off the ground and backed away slowly, holding the large twig in my hands like a sword. I knew better than to run. I needed to climb something. I was so busy scanning my surroundings for a tree with low-hanging branches that I forgot to look down. I tripped over a rock, tumbled backward and fell to the ground. The dogs were on me in an instant. I waited to feel their teeth sink through my skin.

Then the air popped behind me. One of the dogs howled in pain and sprang at least a foot in the air. Another pop and there was a spray of sawdust from the trunk of a nearby tree. A third pop followed and the dogs fled.

I examined my arms and legs for missing flesh and bloody wounds, but much to my surprise, I was completely intact.

I picked myself up and turned to face it. There on the porch of the house was a girl my age. I saw the hair first—a fierce mane of copper curls. Then my eyes moved to the pellet gun in her hands. The freckles came into view as I walked toward her. They covered the bridge of her nose and spread out over her cheeks. But it was the eyes I recognized. They belonged to the mud-covered creature I’d seen spying on my house. “Those your dogs?” I asked.

“Nope,” said the girl. “Those’re coydogs. Half wild dog, half coyote. They used to live farther out in the woods. Then you cut half the forest down. Now they’ve been hanging around here at night, eating our garbage.”

“I didn’t cut down the forest.”

She rolled her eyes. “You know what I mean. People like you.” 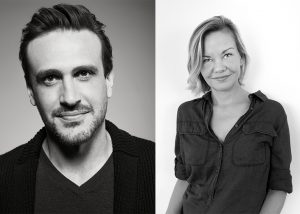 “Where’d you learn how to shoot so well?” I asked. My eyes were practically fondling her pellet gun. None of my friends in Manhattan had that kind of stuff. If a neighbor had spotted a kid with so much as a slingshot, child protective services would have been alerted.

“My gramma taught me. She says you gotta be tough when you’re pretty and poor.” I must have stared at the girl a little too long. Her brow furrowed and her eyes turned hard. “Yeah, I know what you’re thinking. I’m not pretty enough. I shouldn’t be worried,” she snapped.

“That isn’t what I was thinking,” I told her honestly. “You just don’t look like anyone I’ve ever met before.” Which was true but completely pathetic. I probably would have seen lots of kids like her in New York if I’d ever left the Upper East Side.

The girl scowled, like she couldn’t figure out whether to be offended. “Well, I’m not like anyone you’ve ever met before”