So, Saturday was fun. Not only was the England game against Sweden of the World Cup 2018 gripping the nation nor that London Pride was happening (one year, I will go to this!) nor did the UK seemed to be gripped by the fiery thing in the sky (I loathe Summer. Heat, hayfever, lack of sleep, do you really want me to go on? but I was invited to a book blogger event! 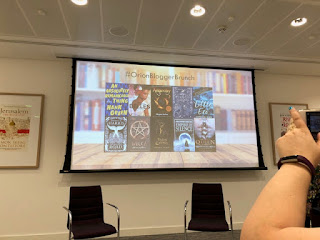 It’s feels like years since I’ve been to a book blogger event (was it the the beginning of this year my last? I miss being with my people!)

Anyway, after since I had moved house the previous week and managed to get a Saturday off work (sadly meaning I have to do a six-day week the following week…), I decided to go. And wow, I forgot what London was like in summer. Plus, with Pride happening, I kept seeing sickeningly attractive people around…

Anyway, onto the books. Once at the event, there was drink, Pride cupcakes, pizza at the halfway point and books! Delicious and wonderful books. And after Orion chatted some titles (I am going to talk about a handful that sound delicious [to me and I wanna read] and I totally want to read! Stay with me, folks!), two lovely authors chatted about that it was like to write the dreaded Second Novel - Catriona Ward and Ed McDonald (just so you know as I didn’t till they talked about to Catriona wrote Rawblood and her second novel is Little Eve while Ed wrote Blackwing and its sequel, Ravencry. Now I need to go forth and read them as these 4 books sound dark, twisted and I love dark ’n’ twisted! I will touch on both their novels in a tick). After that, quick pizza break (aka snoop into the free books - we bloggers are vultures. But I had to go to the bathroom so I didn’t get my hands on any, till the lovely Sarah from FeelingFictional gave me her copy of Little Eve by Catriona Ward, saying that this sounds more up my street than hers - “It’s more crime and dark and much more twisted than what I’m used to”, and the author very kindly signed for me. Thanks Sarah! After that, Orion talked about two titles that won’t be published till early 2019, both of which sound good.

Ok, enough of this. We know why we’re here: the pretty books that caught my eye. So, where should we begin…?


Let’s start with Fierce Fairytales (And Other Stories to Stir Your Soul) by Nikita Gill . This will be a collection of fairy tales with a modern makeover to them. There will be stories, poems, hand drawn illustrations, but what intrigues me here is the modern makeover aspect. Am intrigued to see which fairytales get updated and how…

Another that I think you guys like if you want some badassery is Caged Queen by Kristen Ciccarelli. Set in the same world as The Last Namsara (which I still haven’t read, don’t judge me!), this story follows sisters, death, revenge, redemption and killing the king, but this promises to have just as many twists and turns as The Last Namsara… 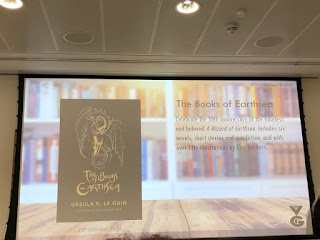 The Books of Earthsea. No, wait, come back! I know there are loads of editions with Earthsea by Ursula K. Le Guin. I have an edition I bought at the end of last year with the first four novels, but this is going to be sold as the ultimate edition. An edition contain all six Earthsea novels, all non-fiction and short stories and illustrations from Charles Vess, who worked with the author for four years before her death. I want this edition, though it’s over a 1000 pages, according to amazon. Yikes! Maybe keep it but NEVER TOUCH IT!!!

Set in the same world as A Pocketful of Crows, Joanne Harris returns with Blue Salt Road. This novella, with illustrations by Bonnie Hawkin, already has vibes of story you tell round the camp fire with a feel of folk tale and ghost story. And this looks like it about selkies…

Now, the big mama of them all! An Absolute Remarkable Thing by Hank Green. I think most of us know who Hank Green is - one half go VlogBrothers, brother of John Green - and this is his first novel. Now, this book is under lock and key - no one is going to read this prior to publication date. But from the little bits of information that we were talk, it feels a little like The Themis Files trilogy by Sylvain Neuvel, but where that is more scifi and politic thriller, this seems much more human and grounded. Just to give you a heads-up, this is going to be the book of Autumn & Winter 2018!

I am going to talk about the two authors who spoke about The Dreaded Second Book, as these seem cool. Catrona Ward’s Little Eve is a Agatha Christie, cults, set in the early 1920s and dark as heck. I’m planning on read this in the next few weeks, but from the little I read, this feels creepy and perfect for those dark winter months to be read by candle. Blackwing and its sequel, Ravencry, by Ed McDonald is a dark, gritty fantasy set in the wastelands known as the Misery and dark rumoured of the Deep Kings rising and all being lost if the ancient wizard’s paradox…

Ok, I admit I heard this when it first came out and I thought it might be too much for me. Epic fantasy, at times, go over my head. But I feel more ready to read grown-up fantasy (I still think I’m in my mid/late teens, even though am thirty *mumble mumble mumble*) … well, grown-up reads in general and, funny enough, on the train to the event, the person sitting opposite me was read Ed McDonald. I only saw the spine of the hardback, but am sure they were read Ravencry… IT’S A SIGN!!!

Ok, these next two books aren’t out till March 2019, I think. But both sound GOOD!

The first is Girl King by Mimi Yu is an Asian-inspired high fantasy told from three points of view. Two sisters become unwitting rivals in a war to claim the title of Emperor… I don’t want to say too much about this title as it sounds all sorts of good! But this is on my radar and oh my! 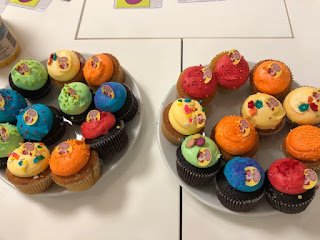 The other book coming out in March 2019 is Queenie by Candice Carty-Williams. Now this made me sit up a little straighter in my chair and I know I am going to annoy the heck out of the poor PR people at Orion for this or to be involved with this book’s release in some way. 20-something Queenie is trying to find balance in her life. She’s the first person in her Carribbean family who went to uni (though they don’t seem to hear her), she works for a boss who doesn’t see her, her friends are either going out with their partners, their families or work… but at least she has her long term boyfriend, Tom, who is going to come back. I mean, this is just a break, not a break-up… right? This is rumoured to be funny, but dark as heck. Bring it on!

After this lovely event, I had to rush home. Friends over that evening and I wanted to see if I can see the end of England vs Sweden in the World Cup game (I don’t like football. Who have I become?! Plus, how on earth are England still in!? HOW?!) but was lovely to see my fellow book bloggers again (Yes, Virginie, I will be getting round to Circe and The Fifth Season soon. Same goes with Glided Cage as well, Olivia!).

So, thank you Stevie, Genn and Rebecca (as well as everyone at Orion) for inviting the mass of book bloggers, vloggers, booksellers and getting us all excited over future titles!