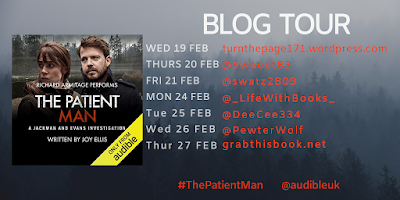 A blog tour review alert! And yes, I know. I am breaking my own rule of getting involved in blog tours and using a review as my stop. I have this fear of reading/listening to a story and then going “Oh no!” over not liking and then having to backtrack. So the fact that this post is here must show you guys that this is a good story, yes?

Right, let me give you some info to this audiobook and get back to you!

So, ok, The Patient Man. My first outing with Jackman and Evans series but the sixth in the series. I’ve wanted to try this series for quite some time but never sure when/how to get in. So, when asked if I wanted to be involved in this tour, I said yes and hoped I wasn’t going to get lost.

Serial killer Alistair Ashcroft is back on the scene, ready to finish his unfinished business with Detective Inspector Rowan Jackman and DS Marie Evans. But for all his taunts and mind games, where is he?

But normal Police work must continue while searching for this dangerous individual. Separate thefts of six pigs, a thoroughbred stallion, guns and red diesel leads the police to the Lorimer family. And the thief of guns from gun-club owner Kenneth Harcourt gets complicated when the man long held responsible for killing Harcourt’s daughter in a hit and run is shot dead - by a sniper. A new killer is on the loose.

But are these three very different cases - the sniper, the Lorimer family and Ashcroft - all separate? Or is there a more sinister connection between the three? And will Jackman and Evans finally caught Ashcroft or has he got one more trick up his sleeve? 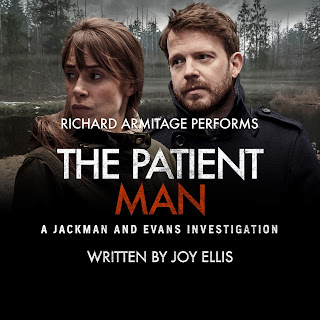 Ok, like I said before, this is my first outing with Jackman and Evans and you know what? I enjoyed myself with this and I don’t feel lost with this. However, if you have followed the series from the start with The Murderer’s Son or Their Lost Daughters, I do think you would get far more enjoyment and satisfaction as this is the conclusion of one long running story.

Like I said, I enjoyed it. And, here is the weird thing - I can’t really explain why. In theory, this shouldn’t work for me at all. I like my crime stories to be fast-paced, have cliffhanger chapter endings, this is a police procedural whereas I normally read/listen to thrillers that usually follow a family member effected by the crime, a private investigator or someone who works with the police but who isn’t a police officer (such as a medical examiner or forensic anthropologist).

This shouldn’t have worked for me. And yet it did.

I liked how Joy Ellis and the narrator, Richard Armitage, slowed the story down and let it breathe. I liked the fact that the story, while a little slower compared to my normal crime read, still had some pace and kept me hooked and intrigued while invested with this characters and the situation. I can’t explain what made this story work for me, but it did and I’m glad that it did as I want to know what happens next and what happened before.

While this might not be everyone’s cup of tea due to the pacing and narrator (like I’ve said before, an audiobook narrator can make or break an audiobook), but I'm surprised how much I liked this and am curious to try another Jackman and Evans thriller (not sure which yet). But I think if you are a longtime fan of the series, you have to put this on your TBR.
Posted by Pewter Wolf at 08:00:00