I think, by the time this goes live, we've all seen this show and, hopefully, have news on series two. However, at the time of writing this, Heartstopper has only been out for a week and I have binge-read Volumes 1 & 2 (and will be starting Volume 3 & 4 over the May Day Bank Holiday Weekend). And we are all raving about this adaption. At the time of writing this, Rotten Tomatoes has given this show of 100% (which is UNHEARD OF!) and it has an average audience score of 98% (again, unheard of).
I have reread Volume One and then bought Volumes Two, Three and Four (though I did read the web-comic when it was coming out) and read Volume Two and, so far, am finding it an utterly joy. It's just lovely and is a wonderful feel-good read with positive LGBTQ+ themes.
I think one of the reasons why most viewers adore this series is the characters matters. We care for them and we fall in love with them. Plus, the level of representation in both graphic novel and TV series is high. If this show came out when I was in my teens and figuring myself out, it would have been a lifeline. 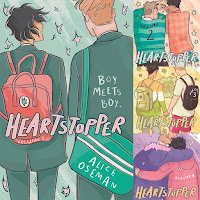 REPRESENTATION MATTERS, NOW MORE THAN EVER!
Sorry, I did have plans to write a long post about the show and have faithful it was to the first 2 volumes while expanding stories with other characters and hopes for series two (do we want a series two? I kinda do as I want to see more, but I don't at the same time as scared it will mess series one's happiness up!), but I can't really think of anything to say. I am reading the series, I've read the show and I have probably chatted too many times on social media about this. But yes, this is a lovely series and I am having a blast!

Email ThisBlogThis!Share to TwitterShare to FacebookShare to Pinterest
Labels: Heartstopper