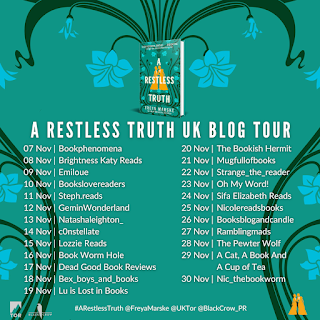 AHOY AHOY, LAND LOVERS! Here we are on my stop on the UK Blog tour, celebrating the release of A Restless Truth by Freya Marske! And it's a review-based tour so let's get going!
Title and Author: A Restless Truth by Freya Marske
Publisher: Tor
Bought, Borrowed or Gifted: Gifted by publisher and PR company via physical and NetGalley in exchange for an honest review/reaction
Buy From (Affiliate): Bookshop.org
In the second book in the Last Binding trilogy, Maud Blythe finds herself on the RMS Lyric, returning to England from New York. Her reason for going is because of her brother, Robin, and the cause to protect magic in the British Isles. It should be an easy trip back.
Expect when she discovers a dead body, a bad-mouthed parrot, missing silver and jewels. She, also, meets the beautiful stranger, Violet Debenham - a magician, an actress, a scandal, a siren - all the things Maud should fear and yet, desires. As the two grow closer, they have only six days to untangle a conspiracy and solve a murder, all of which started generations ago...
When I first read A Marvellous Light last year, I didn't know it was the start of a series. Once my brain finally twigged this detail, I was so happy as I really enjoyed myself. I said, at the time, there was a quality to it that I instantly warmed to and connected to. Plus, I enjoyed the characters and I spent most of the book, shouting at the two leads - Robin and Edwin - to "JUST KISS, YOU MORONS!"
So, as you can guess, I had hopes with Restless Truth. I wanted this to be good and up to the high standard that A Marvellous Light held. And Restless Truth was up to that standard and, dare I say it, I think I enjoyed this one eversoslightly more...
It's always a risky move for an author to change the protagonists in a series. Even the author admitted it herself. But Maud and Violet were so different and refreshing compared to Robin and Edwin that it did work. And to see their relationship grow very quickly (this book takes place over a six day period and we don't know where book three is going to take our little band of merry troublemakers) to friendships, sexual desires and possible something much deeper was a delight. 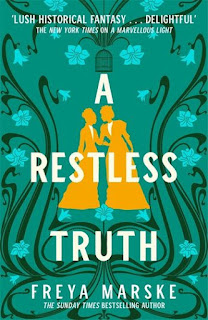 Plus, we had really interesting side-characters (Hawthorne was only in a chapter or two in Marvellous Light and he's stuck on the boat and forced to help Maud and Violet so we see him a lot and OH! I want a book about him. And Ross, a new character who acts as a sparring partner against Hawthorne was refreshing and bought a lot of humour).
I think it was the characters that made his for me. I just fell for Maud's stubbornness and yet her devotion to Robin, Violet's mischief and cunning, Hawthorn's arrogance and yet his desire to care and Ross... well, being Ross.
This adds a little more background to the mystery of the Last Contract. Not much, but enough to make me concerned that book three might do a bit of info-dumping rather than give us the action and romance readers desperate for. I, also, had moments where I felt elements were a little to neat (but then, I like things to be a little untidy so I'll let that slide).
But this was a delicious sequel, and I am excited/nervous to see how the last book in the trilogy goes and how it ends... maybe a reread of A Marvellous Light is in order...
Posted by Pewter Wolf at 07:30:00