GoodRead - The Girl Who Chased The Moon 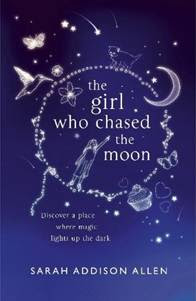 So, why did I read it? Well, a friend of mine, who has fallen in love with Sarah Addison Allen’s two previous books (Garden Spells and The Sugar Queen [she prefers Garden Spells]) got a copy of the book from the USA (from a site I use. And no, it’s not a US website. It’s a UK based site) and read it. Though she loved the story, she found the ending a tad frustrating and after she told me about the basic plot (and sneaking a quick look on Amazon), I offered to read it (much to her surprise, I’ve only now discovered!)

So, here is the basic plot to The Girl Who Chased The Moon. After the death of her mother, Emily Benedict moves to Mullaby, North Carolina, to live with her grandfather who, not only is a real life giant, but who she didn’t know existed till after her mother’s death. And moving to Mullaby, Emily discover that her new home is a place of oddities. The wallpaper in her room changes depending on her mood, strange lights dance across her back garden at midnight and the biggest mystery is of her mother and the terrible deed that she did so many years ago. To a family whose son she is slowly falling for…

All the while, her next door neighbour, Julia Winterson, bakes cakes. She bakes them to satisfy the town's sweet tooth – a man who she fall in love him when she was sixteen - but also in the hope of sending a message to someone she fears might be lost forever…

Because this is a book that’s outside my “comfort zone”, I might be more judgemental with this story, but I found this book a fast, comfortable read. It is chick-lit – I’m not going to deny that – but Sarah Addison Allen gently pushes the magic into the story that it doesn’t feel like your typical chick lit. But she puts not too much magic in to you make you groan and think this is a fantasy story. A bit like the dusting of icing sugar on a cake (yes, be warned, this review might have cake references in it).

And, although this story is Emily’s, you also follow Julia’s and her story I found the most interesting. I seemed to relate to her more than Emily. But both stories are good stories to follow. 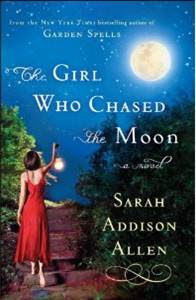 Now, the ending. The thing my friend wanted the opinion on. Well, not the ending exactly, but the final chapter. To me, it fitted the story completely and I liked how the story came to a close. To my friend, she found it frustrating. She even went onto Facebook and asked the author out of curiosity if there was going to be a sequel. The author said that she didn’t have plans for a sequel. But who knows… but treat this as a stand alone novel.

Now, best way to describe this book: as a slice of cake. Light, fluffy and addictive. But be warned, some people will get a sugar low when they finish the book.