Reboots. Everything recently is having a reboot. Films are (Spiderman being the main reboot of the moment), TV shows (loads of 70s shows are getting a modern day upgrade like 90210). And now, books seem to be going through the reboot with some classic characters.

Recently, a reboot that follows the adventures of a 14 year old Sherlock Homles was published by Macmillan Children's Books. The first story in the series, Death Cloud, came with high praise from both critics and readers alike, just like the Young Bond books.

And now, Faber & Faber will be release a modern day reboot of Tarzan. According to an article on The Guardian (http://www.guardian.co.uk/books/2010/jun/30/tarzan-new-novels?utm_source=twitterfeed&utm_medium=twitter), Tarzan: The Greystoke Legacy will will be set in the present day, in and around Congo where Tarzan is 17 or 18 years of age while Jane, whose father is part of an illegal logging expedition, gets lost in the jungle at around 14 years old. The author of this revival, Andy Briggs, has said that Jane will be “…tough, to be Tarzan's equal. Not physically - she's not jungle savvy - but I wanted her to be a tough kid. She's had a very hard life but she's been brought up with technology – she's part of the Facebook generation, she owns an iPod. But as she goes deeper into the jungle, she sees its beauty.” 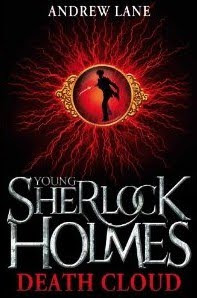 Also, the author, who is a fan of Tarzan, says stated that it’s the right time to give Tarzan a modern day retelling, saying “I think now more than ever Tarzan is a relevant character … He was the first eco-warrior, and I wanted to hold on to that." He also described the Tarzan in this retelling, aimed for nine to 11-year-olds, as more “edgier and more feral" character.

Now, I don’t mind once in a while an story getting a modern day look. I don’t. That’s why I’m writing this random blog (I have signed copy of Death Cloud [won it from a competition from @BookZone] and from the few pages I’ve read, it looks like a treat!). But I do wonder if these reboots and retelling of classic characters is good for books. Because, not only do these books have to excite new readers, they have to remain loyal to fans the character already has. Plus, there is a tiny fear that all publishers will go down this route and won’t bring new talent out onto bookshelves.

But I think that this is also a good thing too. If these types of books get kids reading (and everyone is saying that boys read less than girls – and all these books are boy targeted) and it gets people to go to the original works, then surely that’s a good thing.

Just wanted to know what you thought of this argument? Leave your comments below!!!
Posted by Pewter Wolf at 20:31:00