As you guy know, I kinda love Kimberly Derting. If you don't know her, she is the author of The Body Finder and its sequel, Desires Of The Dead, which I am currently reading at the moment (so good!). So, it didn't escape my notice when she wrote on her blog that she has been asked to write two more books in the Body Finder series, nor did it escape my notice when she reported that she has written a dystopic-fantasy novel called THE PLEDGE. And, on her blog, she teased us about it with the following...

Words are the most dangerous weapon of all.

In the violent country of Ludania, the classes are strictly divided by the language they speak. The smallest transgression, like looking a member of a higher class in the eye while they are speaking their native tongue, results in immediate execution. Seventeen-year-old Charlaina has always been able to understand the languages of all classes, and she’s spent her life trying to hide her secret. The only place she can really be free is the drug-fueled underground clubs where people go to shake off the oppressive rules of the world they live in. It's there that she meets a beautiful and mysterious boy named Max who speaks a language she's never heard before . . . and her secret is almost exposed.

Charlie is intensely attracted to Max, even though she can’t be sure where his real loyalties lie. As the emergency drills give way to real crisis and the violence escalates, it becomes clear that Charlie is the key to something much bigger: her country’s only chance for freedom from the terrible power of a deadly regime.

Doesn't it sound great?! I love it! If you want to read a tiny teaser of The Pledge, click here to go to Kimberly's blog. I tweeted Kimberly (@KimberlyDerting) about the book and asked if she knew if her UK publisher, Headline, will publish this in the UK. She doesn't know at the moment, but I really hope this does come UK-bound (with Headline or another UK publisher)! And I hope it comes with the same cover as the US, which is below! 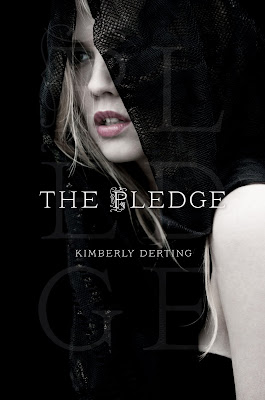