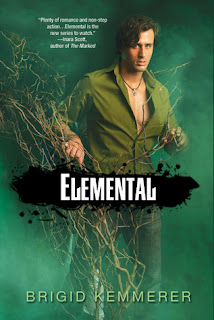 I randomly came across this on Book Probe (hi Braiden) while trying to find his review of Stormdancer by Jay Kristoff. Though I’m pretty sure I have seen the first book in the trilogy, Storm, on Goodreads through other book bloggers wanting to read it. But it was reading Braiden’s review of Storm and he mentioning that there was a prequel, Elemental, did I decide to treat myself to both these on my kindle.

Emily Morgan keeps her powers of being an air Elemental a secret. She knows what happens to people who flaunt their powers. As she works on a summer job, she gets in connect with Michael Merrick, an earth Elemental. He could level cities and cause earthquakes if he wasn’t careful. Which makes him sexy. And extremely dangerous.

But they get drawn to each other. And Emily’s family don’t just want Michael to stay away from Emily. They want him dead.

Now this is a prequel that’s set 5 years before the events of Storm takes place, so it was really a taster – a teaser – of what this series is about. And I really liked it. It was a fast read and, though I read it over two days, when you think how much time I spent on it, it was only really an hour. Maybe even less than that.

This is a set up story where we get to feel out what it’s like to be an Elemental. I’m pretty sure Storm will tackle this further (and yeah, I have it on my kindle so I know what I’ll be doing next time the UK gets a thunderstorm!). I do like this story and I can’t wait to find time to read Storm!

Not much of a review, I know! Will try harder next time...