GoodRead - The Man In The Picture 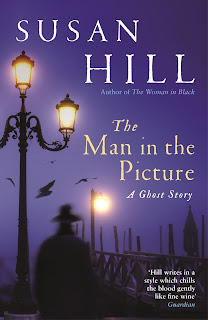 I fully blame Amazon and their 12 Days of Kindle sale earlier this month for this. I was scared off Susan Hill by the movie version of her classic ghost story, The Woman in Black (seriously? How was that a 12A movie?!) as the audiobook version creeped me out (review here). But when I saw this for 99p, I couldn't resist. I bought it and a few others eBooks that I hope to read over the coming year (unlikely, but I shall try!).

By the fire place, Oliver's old Cambridge dom, Theo, tells a tale. A tale about a painting he has hanging on the wall. A painting of a Venetain carnival. But behind the masks within the painting, lies something sinister. Something that will slowly have an effect on Oliver's life, although he is unaware of it. For the painting isn't simply a painting...

This is a very quick read and fills very neatly into the classic ghost story. No blood, guts and gory here. Just a feeling of uneasiness and Susan Hill does this really well. I read this in 3 sittings, two of them at night and at these sittings, I did feel a little spooked by it as it was the sense of foreboding. The reader knows something awful is going to happen but the characters in the book don't.

While this is a quick read and some of you will like this this, I have problems. Two, mainly. The first is the way the story is told. I read it with four voices in my head: Oliver, Theo, the Countess (which comes later in the story) and Oliver's fiancée, Anne. While I know it should be two technically as Oliver is writing the story down, I heard four voices. And I had no idea when one voice stopped and another started. I had to guess every time a chapter started if Theo had taken over or if Oliver was still talking to us. It was very annoying and took me out of the story every now and then.

The second was the ending and the fact it didn't spook me. Maybe it was when I read it - being very tired - but with the first two sittings of read this, I got spooked. But when I read the last bit, I didn't feel spooked. I kinda guessed the ending and it didn't unnerve me. I was kinda "... is that it?"

I can very much see some of you lot reading this and getting creeped out by this. And I will read another Susan Hill ghost story (Dolly looks quite scary!), but it didn't rock my boat like The Woman in Black did.

PS - I was going to try and find an image of Venice Carnival scene but came across these two pics and don't they look creepy?!