You must be wondering if I'm alright or not. I mean, within a few weeks, I have read the movie companion, seen the movie and, now, read the manga for a book that I liked, but didn't love (I still much prefer Beautiful Darkness more than Beautiful Creatures and I still have every intention to read both Beautiful Chaos and Beautiful Redemption by the end of this year). But I won this via Twitter when Penguin Books did their #TwitterChat with both authors, Kami Garcia and Margaret Stohl. I asked the question if they were times they disagreed over any events that happened in the series and how they overcame them. I'm not sure if the question was answered, but I won a copy. So, thank you Twitter!

In this manga, it tells the basic story of Beautiful Creatures. In the town Gatlin, Ethan Wate is desperate to escape. But when Lena Duchannes enters his life, Ethan discovers that the sleepy town of Gatlin isn't as sleepy as he first thought. Soon, Ethan and Lena's love for each other is tested...

Out of this and the movie, the manga is the most loyal. And this surprised me. I honestly thought the manga was going to be a cheap and fast way for the publisher to plug in the hype going around the series due to the movie. Also, there's a feeling that, if a book/series is popular in YA at the moment, then there HAS to be a graphic novel/manga to go with it (milk the cash cow dry, publishers!) .And it didn't feel like that. It felt like the artist who adapted the novel into this - Cassandra Jean - is a fan of the books (I could be wrong) and took from the novel what was important and put them in the manga. I mean, there was so many things that I read in the manga that I honestly forgot was in the book (Link getting a tattoo of Ridley, for example). This helped refresh my memory of this book and, being honest with you, I liked this. I honestly enjoyed reading this. I think I might have enjoyed this more than the novel (please don't hurt me!) 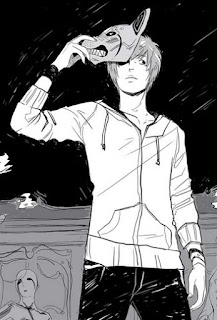 The art. I have to talk about the art. It's a manga, I have to talk about the art. And I really liked the art. It just fitted with the world of Gatlin. I know some of you guys won't and that because of the the style. It's very sketchy. It's not neat or polished. It's as if Ethan drew this in a sketch book. So, because of this style, some characters' faces seem flat and you have moments where there's writing to show the mood or an action (ie AWKWARD, BAM, SLAM and GASP). But this, in my opinion, seem to fit and work.

I would really like the rest of the series to be done as manga, but I sense this will depend on how the movie does (and from what I've heard, the box office is doing ok, but not enough to warrant a sequel...), but if you're a fan of the series or of manga, you might want to give this a peek.
Posted by Pewter Wolf at 08:00:00