GoodRead - Being A Boy 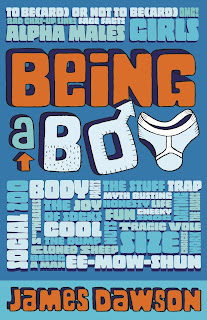 As you guys are probably aware, I am not a non-fiction fan. I find it a bit jarring for my taste so when I do read non-fiction, it is VERY rare. But when I was chatting to the lovely Cait about Maureen Johnson, I asked about James Dawson's next horror novel that Hot Key are publishing next year. And, before I knew it, Cait asked if I wanted James's first non-fiction book, Being A Boy, I went "Why not?"

Now, as someone who had survived puberty, I think this would have been good to have when I was going up. It would have answered those questions I had. Do I have to be in a relationship as a teen? If I'm not ready to have sex, is that ok or does that make me a freak? Is my body meant to be doing that?

While James writes with his humour, he always writes with brutal honesty and this is needed. Though some of the illustrations (some, not all) by Spike Gerrell felt a tad childish for my liking, I think the two balanced each other. It was serious and talking about a serious subject matter, but it had humour (because... do you honestly think male teens would read this if it was just serious?), it helped make this short book feel useful and helpful.

My only worry with this book is how exactly teen boys are going to read it? It's not going to be seen as "cool" if you read this in public (and some teens care far too much about image - not all, but some). I can imagine that bookshops and library will put this under either "Non-Fiction", "Health" or (cringes a little) "Mind, Body and Soul" and when was the last time you saw a teen boy go ANYWAY near these genres? And if this book was given in class during sex education, I find it hard to believe that most boys in the class would read it. They would see it as homework or a punishment.

It might not be every boy's cup of tea but if one teen reads this and feels less alone in the world, then this book has done its job, right?
Posted by Pewter Wolf at 07:30:00