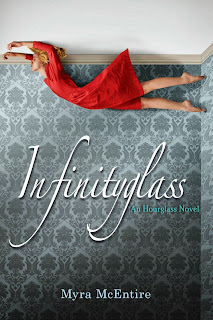 I was actually planning to read this in November (come back next Tuesday to see my weird plans for the next 2 months) but I changed my mind. The lovely Emma from Book Angel Booktopia (who is probably a bigger fan of the series than me!) asked that, in the near future, she could borrow my copy of Infinityglass. And because it's Emma (who is brilliant/thoughtful/kind and one of my favourite book bloggers), I said of course. So, because of this, I decided to read it. Plus, this had been calling from the depths of my To Read pile for a while so, actually, Emma did me a favor. Thanks, Emma!

So, Infinityglass. Because of the events that happened in both Hourglass and Timepiece, time is now in flux. And it's fracturing. People from other times can slip through into the present, rips are getting bigger. If this isn't fixed, the world is in danger. And, because of this, the only solution is finding the legendary Infinityglass, an object that can fix this. Expect it's not an object. It's a person.

Before I go any further, I wanna talk about the covers in the series. They are beautiful, aren't they? And Infinityglass's is probably my fave out of the three but, at the same time, is the most freaky.

Ok, now I have that out of the way, let's talk about this, the third and final in the series and, because of this, let me get the cons out of the way. I only have two and one isn't a con, if that makes any sense. The first con is more a worry for you guys. I fear that some of you guys will read this and go "Oh, dual-narrative" and will see the similarities in the voices of Dune and Hailey. I never truly saw that, but I worry that some of you guys will. 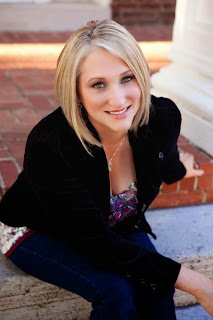 My second con is length. Out of the series, so far, this is the tiniest! My copy is less than 300 pages. Maybe it's the fact I don't want to leave this world but I could have so easily had another 25 or so pages. There were some revelations that I wished we explored more [not saying anything - spoilers!], but like I said, I think it's because I'm not ready to say goodbye.

Ok, pros. Myra's writing. I love this woman's writing style. Her writing made me read the pages faster and I easily stayed up late on more than one occasion, going "One more chapter won't hurt". And no matter how confusing the plot got, Myra made sure it still made sense. And if you did lose the plot for a few pages, you were reading because of the characters and their relationships (oh, Dune & Hailey relationship was so sweet and so different to Emerson & Michael's in Hourglass [which was kickass] and Kaleb & Lily's in Timepiece [which was hot]). And the snarky humour/one-liners! This series has humour and that's always a bonus.

I still find it baffling that this series hasn't got a UK publisher, seeing as the UK is the home of Doctor Who and this series would be perfect for you Doctor Who fans! And with Fox getting the rights for the movie (now I think of it, I can really see this fitting a TV format better [can you imagine the hot actors this series could have?]), I haven't really said goodbye to this world, just yet. But I hope Myra returns and writes something (even a novella - I would happily take that!). But, if not, I want to read what Myra writes next. Like, as soon as possible.

Maybe I should reread Hourglass again, just to pass the time...