The A to Z of Railhead with Philip Reeve: Letter N 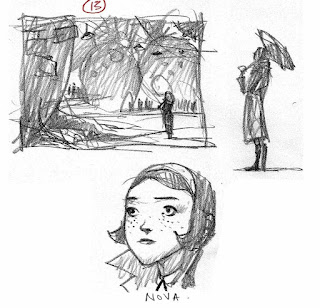 N is for Nova


The Motorik looked back at him with what he supposed was meant to be an encouraging smile. She had a cheap, generic face he'd seen on others of her kind; the eyes too big and too wide apart, the mouth too long. But there were patterns of freckles on her cheeks and across her small, straight nose. Whoever heard of a Moto with freckles?

In the previous entry I wrote about Motorik, the android underclass of my Railhead universe. Nova is one of them, a servant to the character named Raven who employs my hero at the story’s start and draws him into danger. I originally had another heroine in mind; Nova was just there to open doors and dump some exposition. But when I started writing about her I found that she had a sense of humour, and a story of her own, and she quickly started to take over. She seems more curious than other Motorik, or maybe just more open about her feelings (and about the fact that she has feelings). She doesn’t mind being a machine - she knows that she’s a very superior model - but she’s fascinated by humans. In the abandoned beach resort of Desdemor she whiles away her time watching ancient movies from Old Earth, and wondering what it would be like to be human. She’s trying out facial expressions, and she has worked out how to alter the pigmentation settings of her artificial skin to give herself freckles, of which she is very proud. She isn’t trying to pass herself off as human. She isn’t some Pinocchio character, yearning to be a real girl. She just wonders what it would feel like…

(Railhead by Philip Reeve is published by OUP. For more information, you can click here and check out Philip's website. The sketch used on this post was drawn by Ian McQue. You can check him out here to see more of his artwork. My thanks goes to Liz for asking me if I wanted to be involved in this tour - Thanks Liz!)
Posted by Pewter Wolf at 07:00:00