Today, I want to welcome Emma Carroll to blog! Emma is the author of books such as Frost Hollow Hall, The Snow Sister and her latest, Strange Star. Now, Emma will talk briefly about Strange Star below but if you like creepy stories, you might want to get your mitts on this. (plus, if you wanna read a tiny taster, you can pop over to Tales of Yesterday's blog and read an extract!)

To celebrate this book's release, Emma Carroll is here to answer 5 quick(ish) questions about Strange Star to wet your appetite!

So, before I throw you into the deep end of my hard (*snorts with laughter*) questions, I just want to say a quick thank you to Emma for taking time out to answer these questions and for Hannah at Faber for inviting me to take part in this "tour".

1. Can you give us a quick introduction to Strange Star and to the main characters?
'Strange Star' is a gothic tale inspired by 'Frankenstein' and the myths surrounding its conception. I've borrowed 'Frankenstein's' story-within-a-story structure: my outer narrative is from the POV of Felix, a black servant boy who has ambitions to become Lord Byron's valet. The inner voice is Lizzie's, whose tragic past has brought her all the way from Somerset to Switzerland in search of her sister.
2. Without spoiling too much, could you give us more about the "Strange Star" of the title?
Absolutely! It comes from a line of poetry written by Mary Shelley in 1821 in reference to her birth. As the daughter of two great intellectuals William Godwin and Mary Wollstonecraft, there's a sense she was marked out for greatest from the start. In August 1797, a comet was visible in the sky over London. Despite advances in astronomy, many at the time still saw this as an omen of ill fortune. Sadly, Wollstonecraft died 11 days after giving birth so Mary never knew her mother personally, a grief that plagued her for much of her life. The circumstances of her birth and her incredible parentage had a huge impact on her.

3. As this is a historical fiction, how bound to the truth of what happened are you when you were writing? Did you make any changes to history that readers might notice and investigate?
I admit I've been quite creative with certain aspects of it! The comet, for instance, came from 1797, not 1816, but I loved the idea of it representing that tension between progress and superstition that pervaded much of the early C19th. As an author, I often tend to settle on a title early on - I was determined to call this book Strange Star... so the comet had to stay! There are lots of rumours surrounding that famous night at the Villa Diodati. Shelley herself wrote varied accounts of it throughout her life; Dr Polidori's offer another perspective. What I love about using history are the gaps left for your imagination to fill. That said, there are suggestions that the Shelleys attempted to adopt a child on their travels through Europe but that it somehow fell through. The details surrounding the publication of Frankenstein at the end of 'Strange Star' are also based on fact. 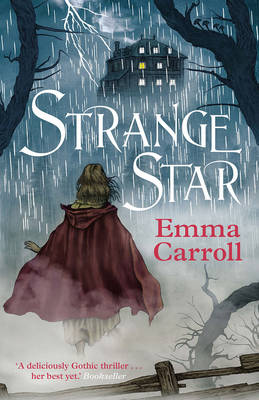 4. Speaking of historical, you replaced Dr Frankenstein with Francesca Stein. Was this an easy decision to make and did you have any ideas about writing this character before you started writing or did she take control of her own story?
A bit of both really. I always intended the scientist to be female because this ties in with Shelley's own frustrations at being a highly intelligent woman in a male-dominated world. It also, I hope, coveys the message that a story's genius/villain can be either gender - hence the assumption by most of Sweepfield that the scientist at Eden Court is male. Once I'd decided on Francesca Stein, she pretty much took off - she has all the grace and charm of someone of her class, yet uses this to manipulate others. Yes, she has motivations and ambitions of her own but she also has a rather shady past, which may or may not link to Felix's.

5. Last question: can you talk to us about what you're working on next, or maybe a clue to wet our appetites?
A little taster? Oh go on then... the first draft isn't finished yet so I don't want to jinx things because it's bound to change but... *drum roll* it's called 'Letters From the Lighthouse'- another early title choice!- and is an evacuee story set in a strange Devon village during WW2.