Novella Review - The King Of Rats 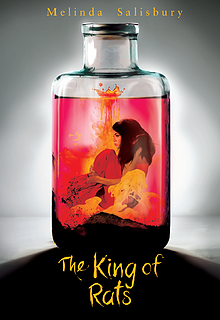 After finishing The Sin Eater's Daughter last Friday, I wanted to jump straight into The Sleeping Prince. But as I'm STILL rereading Philip Pullman's Northern Lights as part of my #re3 Challenge, I decided to focus on that before I return to the Sin Eater world. And, against some people's tweets, I decide to read one of the short stories Melinda wrote for the Waterstones's blog, but I was given by the publisher in a small booklet form, The King of Rats. Now, according to tweets, I should have saved this for after Sleeping Prince... oh well! Too late now!

Everyone in the Sin Eater's Daughter series knows the Sleeping Prince, but the no one really knows why he's sleeping and when/if he will awake. But centuries ago, the kingdom of Tallith was a utopia, filled with proud and privileged people. One of them was Prince Aurek and his twin sister, Aurelia. Both who will lead Tallith into a bright future.

But then the rats came. Desperate, the King summons a rat catcher to get rid of rats. But the rat catcher didn't come along. He came with his son and his beautiful daughter. Upon seeing her, Aurek decides to have her. This decision will set off a chain of consequences that will last for centuries to come...

What's also good is that this is a free story and it's not essential reading. If you only read the novels, that's fine. But if you read this and the other short story (I believe it's called Heart Collector and I think it was on the Waterstones's blog for a limited amount of time) , it gives up an extra layer to the darkly seductive world that Melinda has created.

Fans will devour this within half an hour. I can't wait to find time to start Sleeping Prince in the next few weeks...
Posted by Pewter Wolf at 16:00:00