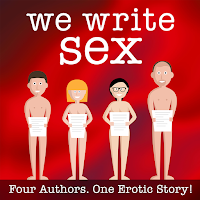 Welcome to the Pewter Wolf - AFTER DARK.

Well, it's not like I can post this Q&A in the daytime, can I? Someone has to think of the children!

Anyway, as you guys know, I am always on the hunt for a new podcast to get my ears into. And, out of randomness (I'm blaming Twitter), I saw We Write Sex. And after listening to the first few episodes (and cringing/laughing/shouting at my phone "WHAT?!"), I had to email and ask if they fancied popping on the blog for a quick Q&A.

And the lovely Rob asked my questions (in a very non-sexy manner, FYI) and I have been threatened that some of these might make it into next week's episode and I might be mentioned [insert the worried glances now]. So, before I hand you over to the questions and answers, just want to thank the podcast again for answering these questions super fast (keep the dirty jokes to yourselves) and if you want to check out the podcast (it does have adult themes - I need to put that in), check out wewritesex.com or check out your podcast provider and have a listen.

Now, onto the questions!

First of all, thank you for answering some questions.

Let’s start with who’s idea was it to write an erotica novel and do it in a podcast? And why?
We’ve made no secret of the fact that we are all huge fans of My Dad Wrote a Porno. During a conversation, it was my idea to have a go ourselves. I think originally, the idea was simply to write the book and not necessarily to record it. But then we just thought – why not!? The real talking point there was the fact that potentially our friends and family might hear it – did we really want them to know our smutty fantasies? In the end, we all decided we didn’t care.

What’s it like writing a chapter at a time without knowing where the story is going? Is it exciting or a bit nerve-wracking?
It’s a bit of both. It is difficult to plan because you just don’t know where the story will be by the time it comes back to you. I am sure we all have ideas on where it could go next – but those ideas can get pushed completely out of the window by the next person writing. I imagine the biggest challenge will be writing a suitable ending for the book. One person will have that responsibility and hopefully they won’t disappoint the rest of the group.

You each written your first chapters at the time of writing these questions, have your opinions of each other changed due to what each of you has written?
Possibly. We all seem to have a personality which comes through both when writing and doing the podcast. Mei Mei is known for her dark and smutty sense of humor, but her chapter was no-where near as filthy as we thought it would be. Laura is probably the quietest on the podcast, chipping in here and there with the odd gem of a story. Rik is always the quickest with the wit and his comments when listening to other people’s chapters are often what makes it so funny.

Is there any characters you based on yourselves or people you know?
I don’t think so. If they were to come from anywhere it is most likely to be from film. I had a crush on the blonde, mute Russian from Die Hard 3 when I was younger. I didn’t even consider this when writing the Natalia character – it struck me after.

As you each are writing a chapter and there’s no plot, is there any rules you have in place over certain characters or situations and what they can/can’t do (for example, you all have talked about Faye and her innocence)?
Nothing is off limits, with one exception - we have agreed that no-one should use a real-life person by name. That could lead to all sorts of trouble and we really don’t want to go there.

In Laura’s and Mei Mei’s chapters, a thriller/mystery element has been added to the mix over Nicola, her past and what Magnus is up to. How are you guys going to keep the balance between the erotica and new genres you might add in later chapters?
Good question. It’s no secret that Mei Mei loves the story more than the sex, so I am guessing her chapters might be tighter on the plot and less about the love making. Though she may surprise us all! I can’t speak for the others but so far, I have always tried to have at least one good plot point and at least one good sexy moment in my 2 chapters. We’ve all been surprised by how much we are enjoying the plot – it’s not all about the sex. Sometimes I feel like we would have just as much fun doing it if it had no sex at all!

Is there any moments in any of the chapters that you either wrote or heard that you wish you could unwrite or unhear? (Mine is “pancake fold”).
No-one likes listening back to their own chapter. It's cringing and horrible. Often, we have written things we think are quite good, only for it to get completely ridiculed by the others. Personally, I wish I could unwrite Natalia wearing leggings as that seemed to upset the girls. Obviously, I am not up to date on fashion!

As you said on your first episode, My Dad Wrote A Porno is a big influence on your writing. Have you had the podcast and gone “Ok, Rocky’s done this so I can’t do that”? (Am hoping you do nothing linked to The Countess and her words “Bring me my feast” or Belinda’s recent “car crash”)
Rocky has a mind all to himself. I am not sure we could ever match his creative process. Our story is a bit straighter laced than Belinda. I feel like anything we have written could potentially happen in real life – but I am not sure Rocky’s work could be considered in that way. Belinda often gets into these bonkers situations and maybe our group lacks the imagination to take our story in a similar direction.

Finally, any clues on what the next chapter’s going to be called?
By the time you read this, chapter 5 – Magnus – will be released. You will have to listen to that episode to find out the title of chapter 6!
Posted by Pewter Wolf at 22:00:00