Something a little different for the blog today!

Today, I would like to welcome Scott Handcock to the Pewter Wolf. Scott is a writer, a producer and director at Big Finish. And today, he's chatting about his upcoming production for Big Finish, William Shakespeare's Hamlet, starring Merlin's and Versailles's Alexander Viahos in the title role.

So before I hand it over to the mini Q&A, I just want to thank Scott for finding time to answer some questions and thanks to Paddy and everyone else at Big Finish who helped with random questions over dates and time!

If you're curious over Big Finish and wanna know more (yes, am going to do some info-dumping now!), check them at bigfinish.com or via @bigfinish on Twitter.

Now, here's the trailer and ONTO THE INTERVIEW!!!


Hi Scott! Welcome to the Pewter Wolf and thank you for your time.
Thanks for asking me!

Before we go any further, can you tell us what Big Finish is?
Big Finish is a production company that specialises in audio drama. The first kicked off back in 1998 with the adventures of Bernice Summerfield before winning the licence to produce original Doctor Who dramas the following year. Ever since, they’ve just been growing bigger and bigger, expanding the Doctor Who universe, but also other franchises including Torchwood, Blake’s 7, The Prisoner, Survivors, The Avengers, Judge Dredd as well as classics like Dorian Gray, Dracula, Frankenstein, Sherlock Holmes - and now Shakespeare! And we’ve had so many brilliant actors through the doors: John Hurt, Derek Jacobi, Simon Russell Beale, David Tennant, Benedict Cumberbatch… the diversity of what Big Finish does is astonishing. There really is something for everyone! 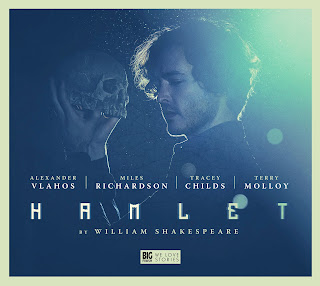 In August, Big Finish is going to release its first Shakespeare adaptation, Hamlet. Why did Big Finish decide to do
Shakespeare and to tackle Hamlet as its first?
Honestly? It was all down to Alexander Vlahos. Since 2012, we’d been working together on The Confessions of Dorian Gray - an audio horror series based on the conceit that Dorian was a real person who Wilde then based his novel on - and after five series, we mutually decided it was time to end on a high, while people wanted more. But we still wanted to work together, Alex is a massive Shakespeare fan, so he asked if I’d direct him in Hamlet. Obviously I love a challenge and so said yes, then I took the idea to Big Finish, who kindly agreed!

Was it easy to transfer Hamlet from a play to an audio presentation? Were there any difficulties you had?
I was very lucky in that I left the editing of the play itself to Justin Richards, who’s very familiar with Big Finish having already written for several drama ranges, and also happens to be something of an expert in all things Shakespeare. We were in very safe hands, and Justin was simply brilliant at pointing up sections that could easily be trimmed, or suggesting alternative sections from the various folios. It’s a very thorough take on Hamlet - running at just over three hours - but he’s really tailored the script to be as effective as it can within the medium.

In terms of direction, it’s a very different kettle of fish. I’ll be honest and confess from the get-go that I’m not the biggest Shakespeare fan in the world - I don’t dislike it, but my specialty was always Greek theatre, so that’s far more within my comfort zone. In that sense I had to re-educate myself completely, though thankfully it became obvious very early on how much the different genres have in common. Due to the limitations of the stage - no elaborate sets, make-up, or CGI - so much of the story is told through language, with epic events described through letters and conversation. Ophelia’s death, for instance, is reported in detail, and thus a great deal more effective on audio than simply hearing someone drown. On that level, Shakespeare’s actually surprisingly easy to transfer to audio!

As a director, the hardest part was making sure I understood what everything meant. My job is to help the cast as much as possible, so I knew I had to study the play in depth so that, if any one of our actors asked a question about any line, I knew precisely what it meant. It was like cramming for my A-level exams all over again, only a lot more fun. Getting the chance to tackle a script and really scrutinise it like that isn’t something you get to do every day, and it was surprisingly fun finding ways to really play the nuances of the language working through. Plus, of course, we recorded wildly out of order - sometimes a single scene over different days, depending which actors were in - so I really had to immerse myself in the text so I could confidently skip all over the place and support the actors who, understandably, needed reminding where they were emotionally at any given point.

It’s no understatement to say it’s possibly the most complex production I’ve ever tackled at Big Finish, for so many different reasons!

Am slightly intrigued over how your cast actors in the roles within Hamlet and in other productions. How do you go about finding the best actor for the role when the role is entirely audio?
Casting’s pretty much the same whatever the medium, I think. You always want the best people for the job, but Hamlet also presented a few additional challenges. Audio acting is actually a very specific skill, and often people come in from stage or film thinking all they have to do is act behind a microphone, but there’s a fair bit more to it than that, so obviously I wanted people I’d worked with before, and knew were confident exploiting the medium to its fullest. You also need people who sound sufficiently different, so the audience don’t get confused. (I know that sounds obvious). Alex and I had a wish list from the outset - mostly comprised of people we’d worked with together on the Confessions series - so we knew they’d not only be fantastic but also a lot of fun, as the project was more than a little daunting for all concerned! 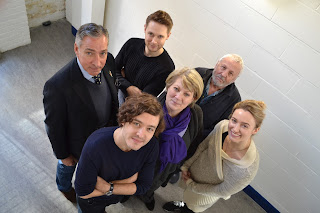 So yes, aside from getting lovely and talented people in - which is par for the course - I was keen to ensure everyone was comfortable with the Bard and already had a fair few credits under their belt, just so nobody would be thrown by the meter or language and we could hit the ground running. On top of that, in fine theatrical tradition, a number of our cast had to double up as several different characters - so as well as being fun, good and familiar with Shakespeare, I knew I needed a group of good multi-voicers who could play a variety of characters throughout. It was a tough cast to pull together in a lot of ways, but so rewarding whenever everyone I wanted said yes! And of course, I knew Alex was a dream of a leading man from Dorian, so it was a pleasure to collaborate with him again on Hamlet.

This is a big change for Big Finish, as Big Finish is known to make sci-fi audio, mainly Doctor Who, but also Dark Shadows, Torchwood, Sapphire & Steel and Blake 7 among others. Was it a big change to go from sci-fi to a classic?
Not really. Before tackling this, I’d already done many classics, including The Picture of Dorian Gray, Frankenstein, Dracula, The Wonderful Wizard of Oz, Carnacki: The Ghost-Finder - even an original drama based on the life of Cicero - so Hamlet wasn’t that much of a change. The only different tends to be that, when you’re dealing with classic texts, people’s expectations are wildly different, which can be hard to get one’s head around. Inevitably, when so many versions exist already, alongside the original text, your audience will have their own interpretation in their heads, so you have to decide very early on what your take is and commit to it. Otherwise there’s a risk you’ll just end up trying to please too many people, and it becomes something more generic. That’s the biggest challenge…

Because of Hamlet, Would Big Finish consider making any more Shakespeare production?
They already are! The lovely Barnaby Edwards - who appears in Hamlet as the Ghost - has just directed a production of King Lear starring David Warner, and I know from conversations we had a few weeks beforehand that he faced exactly the same challenges I had with Hamlet in terms of all the practicalities that came with it, which was weirdly reassuring. I know he’s really proud of it, and the trailer sounds fantastic, so who knows? I can’t imagine Big Finish would only do two, then never again… Perhaps a comedy next time round? I guess we’ll just have to see what appetite there is out there for more. Fingers crossed!
Posted by Pewter Wolf at 07:30:00