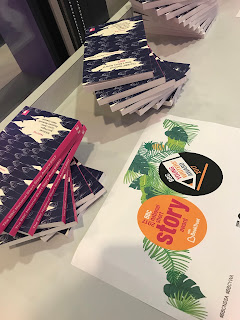 Or, if you fancy a subtitle, "A Boob At the Beeb" (You can blame @gavreads for that and all will be revealed in the next few paragraphs).

As you know, I have been blogging/tweeting about the BBC Young Writers Awards in the past few weeks and, because of this, I was asked very kindly if I wanted to go to the award ceremony for the BBC Young Writers Awards and the BBC National Short Story Award 2017. I jumped at the chance! I mean, it's the BBC! And I love stories - and I love any excuse to book a half day off work to come to London to celebrate stories! (Booked today off as can write this and one other blog post up)! Plus, the idea of discovering new authors I have never heard of before was delicious!

So, yesterday, after panicking about train strikes (because I couldn't get my train app to work!), I made my way and, after getting off a tube stop two stops earlier than I needed to (was power-reading Fate of the Tearling and thought I had missed my stop!), I found the BBC.

It's an odd feeling as the BBC is a huge thing. We all use the BBC in one form or other (TV, radio, internet, app, podcast, etc) so to be there was a surreal moment. And exciting! I saw the window into the One Show studios opposite a coffee shop where I bought coffee and cake. Only to have the plastic fork snap and the cake go splat on the floor.

I dropped cake outside of the BBC! I DROPPED CAKE OUTSIDE THE BBC! It can't get worse than that on my first visit, I thought to myself as I went into receptionist to find where I was going.

How very wrong I was.

After I was pointed in right direction and did quick security check, had to put my bag and hoodie into coat-locker. Which is fine. So, I took off my hoodie. And my T-shirt decided that it loved my hoodie too much and didn't want to be parted from its lover. When I realised what was happening, my naked stomach and a good chuck of my chest were on show. I FLASHED MY MALE BOOBS TO SEVERAL SECURITY GUARDS AT THE BBC! OH! MY!! GOD!!! 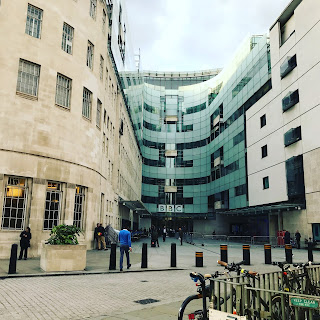 Am never going to be invited back. Ever.

Moving quickly away from that! After that, I chatted to the lovely ladies at ED PR (Emma, Frances and Annabelle) who invited me to the event and an editor at Fleet Books (who's name has gone completely out of my head as I am useless with names! Sorry! And sorry for grilling you about your job - I went a bit OTT on the question front!).

And after discovering there were more people there I knew than I first realised, we had to be whisked into the BBC Radio Theatre where the winners to both the BBC National Short Story Awards and BBC Young Writers Award were going to be announced live on BBC Radio 4's Front Row. (Yes, dear reader, it was announced on Radio 4 so I had to pretend to be smart!). And after a quick speech from three editors at the BBC (I have forgotten one name already [sorry], but we had Di Speirs [Editor of Books] and Aled Haydn Jones [Radio 1's Head of Programmes]), we had the host of Front Row, chat to us and then, we were on the air!

For those of you who want to listen to the show, check out the show here or download the podcast here (it's the National Short Story Awards 2017 episode you want)!

Both winners were announced live on the radio. The winner of the National Short Story Awards 2017 was Cynan Jones's The Edge of the Shoal and the Young Writer's Award winner was Elizabeth Ryder with The Roses. Now, I haven't read/heard any of the stories on the National Short Story shortlist yet (you can read them in the small collection, published by Comma Press or listen to the them via the BBC's new Short Stories podcast), but I have spent most of this morning reading all five entries of the BBC Young Writers Awards 2017 (all are on the website!) and all are extraordinary, and I hope that all five will have literary agents before next year's awards... 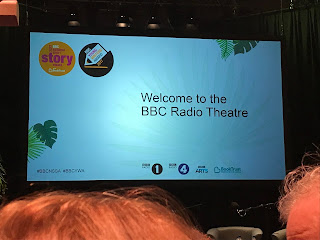 After the show, most of us were thrown into the area where there was wine, a view of the BBC News area (Very open-planned. Very swish!) and I chatted books with people I knew [Hi Rosi, Nina and everyone!]. We chatted about the World Book Day list, books we have/haven't read recently (the reaction I got when I admitted I still haven't read The Hate U Give because the hype I built for it in my head was priceless!), and other odds and ends.

And after that, I went home. I know. A bit anti-climatic. But I had three glasses on wine on a semi-empty stomach so that made things interesting! But to everyone involved in last night's events and involved with both awards, thank you for a wonderful evening. I can't wait to see what you guys are going to do for next year's National Short Story Awards, Young Writers Awards and the new Student Critics Award...!
Posted by Pewter Wolf at 13:01:00