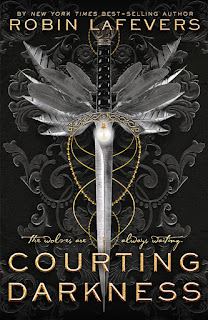 As you guys know, I am planning to try and read the whole series of His Fair Assassin by Robin LaFevers this year (as well as  Christopher Paolini’s Inheritance Cycle - I announced my hopes to read these in this post). But here’s the thing. When I decided this last December, Layla from Andersen Press asked if I wanted to read Courting Darkness  and reveal the UK cover. I said yes (because of course I world) and I was given a ring-binder manuscript as finish copies weren’t ready. So, for the past month or so, I have slowly made me way through Courting Darkness.

The fourth book in the His Fair Assassin series (or first in a duology set after the events of the series), we follow Sybella, one of the most gifted of Death’s daughter, serving deadly justice on behalf of St Mortain. But her younger sisters are her newest mission and in a bid to keep them safe, she agrees to accompany the Duchess of Brittany to France where the Duchess will marry the King and bring together the two countries together as one. But as Sybella watches the French court and begins to distrust the King’s sister, she discover that two fellow assassins from the convent of St Mortain have been placed in the court under cover… but how can she find them?

Genevieve has been a faithful assassin to St Mortain, going deep undercover int he French court since she was 12. But she’s been under cover for so long, she no longer knows what she’s fighting for any more. And when she discover a prisoner deep in the castle’s dungeons, she decides to take matters into her own hands.

As these tow women’s path slowly draw closer together, the two must tread careful if they don’t want to lose everything…

So, reactions. What do I think about this?


Ok, let me get something out of the way first: I am not much of a historical fiction fan. I do struggle with the genre as a whole as I usually find it quite dense, which makes it harder for me to read so I read it much slower than my normal reading speed. So, this book took me around a month to read, but you can say that this would be normal for me due to its genre and the amount of time to read I have of late.

I must admit it is a little slower pace than what I am use to. That’s not a bad thing, but I always like something to happen. I like fast moving stories, whereas this wasn’t. I never felt bored reading Courting Darkness, but I can see some readers rolling their eyes and wondering if anything is going to happen. And I do think the first half or so is a little slower, compared to the last 150 pages where things kicked up a gear. I liked these last few pages and I hope this carries over to the next book. But I do like the two stories and how they slowly merge together and what happened to them separately. That makes them being together all the more fun and complex when they do meet. 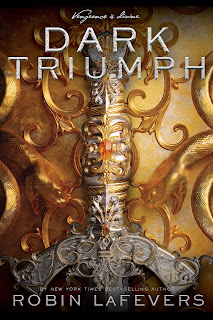 Out of the two voices speaking in the book - Sybella and Genevieve, I liked Genevieve’s story and voice. But, I know if you are a fan of the series, you would prefer Sybella as she is the main character in the second book in the series, Dark Triumph. Which leads me to a question several people have asked me: can you read Courting Darkness without reading the rest of the series as this is the fourth book in the series, but the first in a new duology? And with me only read the first book in the series, Grave Mercy, and remembering nothing to it (I have an awful memory, haven’t you learnt that by now?), I went into this kinda blind and I got through it ok. I think this was because of Genevieve’s voice and the fact the series hasn’t met her before. However, Sybella does reference things that happened in Dark Triumph so, while you can read this without knowing what happened in Dark Triumph, fans of the series who have read it will get these reference. So, if you have read the series, you will be ok. If you haven’t, I think you will be ok, but be aware that things will be said that might go over your head until you backtrack.

Like I said, I am not a big historical fiction reader so, while I did like the plot and intrigued to read rest of the series and what happens next, I did find it a tad slow going. It depends on if you’re a fan of a slower paced read.
Posted by Pewter Wolf at 08:00:00