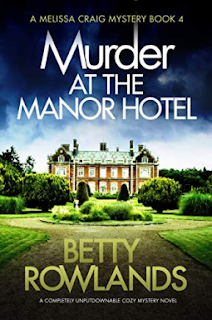 I did warn you guys last month that 2019 will be the year I read a lot more fantasy and crime. So, let’s start with this cozy crime as a little out of my comfort zone. But let me explain why I wanted to read this. After reading Mistletoe and Murder last year (write-up for that is here, FYI), I wanted to read another crime. I wasn’t ready to read fantasy or something else and this seemed to be the title I kept leaning towards, even though I had a load of other crime stories to read (I have two more within this series to read/review as well…) but I wanted something warm and cozy. Something I can read in a fluffy dressing gown with a mug of hot chocolate…

The fourth in the Melissa Craig series (though you can probably read these without reading the rest in series), Melissa is meant to be writing her next murder mystery novel. Expect she’s written a panto-crime for the local drama group to be performed at a local Cotswolds hotel. But when one of the supporting actors is found at the bottom of the steep flight of stairs leading to the hotel’s cellar and Melissa tries to save his life, she swears she can hear voices…

Afterwards, Melissa realises that things aren’t what they seem and don’t add up? Why was the hotel manager so angry when he first discovered the actor at the bottom of the stairs? Why was the actor going into the cellar in the first place? Why was the hotel’s owner so desperate to put the actor in the panto-crime when he was so terrified of acting? Something awful is going on… and Melissa is finding herself being dragged into it…

So, what did I think?


Well… that is going to be tricky because as this is my first Betty Rowlands story, I’m not sure if this is best place to start for me or if cozy crime is the subgenre of crime that suits me best. But this was an okay read for me.

I think the biggest issue I had with it was that, while reading it, I always felt that it was out of time with the modern world. But this was first published in the 1990s under a different title and it’s getting a reprint, which is good as I do think there is an audience for this series and with the world as it is now, I do this a little escapism is needed.

I did go “Wait, what?” over the ending. But I think that’s because, while I did like Melissa and kept reading because of her, I found the result for the murder and crime around it a bit… it didn’t appeal to me in the way it should have.

Like I said earlier, cozy crime might not be the genre of crime I’m going to get along with. If you have read the Pewter Wolf or seen my TBR, most of the crime I read or might read in 2019 is more bloody - Kathy Reichs, Tess Gerristen, CJ Skuse, Agatha Christie (she isn’t as cozy crime as I first thought…). However, the point of Year of Blood and Magic is to read more widely within the fantasy and crime genres so am glad I tried as it is an ok cozy read. But I think I wanted more from it. More what is anyone’s guess. Plus, I have two more Melissa Craig stories to try - Murder on a Winter Afternoon and Murder at Larkfield Barn (book 5 and 7 within series) - so am not giving up yet.
Posted by Pewter Wolf at 08:00:00